Off Topic Posts Welcome. Personal Attacks, Profanity or Obcenity will not be Tolerated.
Post Reply
134 posts

lavron wrote: ↑
Thu May 20, 2021 9:17 am
Miracles continue
The physical therapist was here yesterday and asked me what I wanted to do?
I told him I would really like to get in the truck if I could

So we walked up the hill to the shed with just the cane. I I stepped up on the running board of the truck and plopped myself down in the seat, therapist said he was surprised I did it so easily, so I got in and out a few times to prove it was not a fluke before walking back down the hill to the house. Then last evening I took a ride in the truck down to visit the neihbors had a good visit. next step is to actually drive the truck

Always good to hear good news! as for my hood ducting,it came with it .all I did was cut the hole for the breather. but have a look at it. ideas come from everywhere. maybe the other valve cover could be used underneath the breathers,upsidedown to meet the top one/scoop? 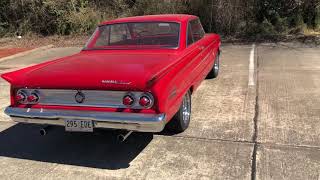 Every day a new miracle to observe

Yes, no rush anyway. Not alot of disposable cash laying about now, cancer is expensive

Good to see you back in the hunt Mike!
I used an Unlimited Products fiberglass tear drop hood scoop and front bumper on my Falcon. Both were pretty nice as received.
They make a ton of different style hood scoops http://up22.com/scoopw1.htm

Great to hear of your progress! Keep plugging away at it.

Drove the truck down to the mailbox and back. did not end the drive in the ditch, so I count that a success

Getting very close to driving someplace. dont think my wife is ready for me to go out solo yet

Going to make a Comet video to post up during the gathering, is there anything in particular you guys want to see? I have one request to cover the air ride more in depth so I might do that one.

Going to make a Comet video to post up during the gathering, is there anything in particular you guys want to see?

A SERIOUS BURNOUT!!!!
I'd rather do it myself if it's done right or not,,,isn't that what hotrodding is all about?

Well right now I still havent gotten a battery to start it, one of the therapist wants to buy the GEO Tracker so I told him Iwould sell it really cheap I think my wife was ready to give it to him. I told him $300 he said he was going to offer $500 for it, maybe I will sell it to him for $400. he wants to build a hunting rig out of it. that woukld give me enough to buy a ventless battery. need to measure the space. but i have heard Optima is not what it used to be

So maybe one of it's competitors? Anyone have a different choice?
Not really a place to do a seriuos burnout I have mostly gravel and probably not wise to get on the highway on Memorial day weekend

and I am not too much into possibly breaking something and wearing my tires out, it happens but not planned.
My wife is off work Monday so going to go out and try t get the car off the jack stands, while she can get in and hold the brake so it wont roll off the ramps as I lower it and run over me

hope fully I can get down low enough to slide the jack up under the rear diff. to lift it enough to drop those jack stands out may sit the car down on the dollies so I can move it around the shed.
See Ya Mike
See Ya,
Mike
My build thread
viewtopic.php?f=9&t=13058

lavron wrote: ↑
Tue May 25, 2021 8:13 am
Not really a place to do a seriuos burnout I have mostly gravel and probably not wise to get on the highway on Memorial day weekend

and I am not too much into possibly breaking something and wearing my tires out, it happens but not planned.

Haven't checked in the forum for awhile. Glad read that your able to get around now and be able to drive yourself. That is great news.

A big thanks to Jim for getting me virtually to the Gathering tonight, may try again tomorrow Good see all the familar faces and several new ones, hopefully sometime in the future I can meet everyone in person

Didn't see the latest Facebook update on here from Lori that she posted about Mike:

Just an update, Miracle Mike continues on his journey - doing well, has started a second round of chemo with absolutely no side effects from it. He graduated from physical therapy this week after completing all his goals, including easily navigating our flight of stairs in the house. He will continue with some speech therapy to work on the higher cognitive skill re-building and memory function. This weekend he will begin work again on his 64' Comet, sanding and prepping for it to be painted. Bought a TENS unit to help with that left arm numbness and he already seems to notice improvement with using it. He is going to visit Bethel Church in Strafford, where we used to attend, to deliver a testimony and message this Sunday to our friends and former pastor there. I am in awe of what God is doing and thankful to have Mike home with me as we are enjoying the summer. We are walking together around the outside of house for exercise and he is regularly driving the cart around. We have an eye appointment set up because there is still some vision impairment on the left side which needs checked out. God is delivering on his promises to my husband and I get to watch these miracles unfold before me. He is good. Very good.
Top

great news.LORI !!just proves there us power in prayer,,,,we serve a good LORD !!! thanks and you take care of yourself and stay healthy....your work ain't done yet,kiddo !!! pop