Has anyone installed the RRS strut conversion in their '64-'65 Comet? I like the idea of being able to use stock steering instead of a rack and pinion and also using the factory lower control arm. With the engine/ header combination I am using a front suspension that uses a cross member under the engine will not work. Another benifit is being able to trim the shock towers. 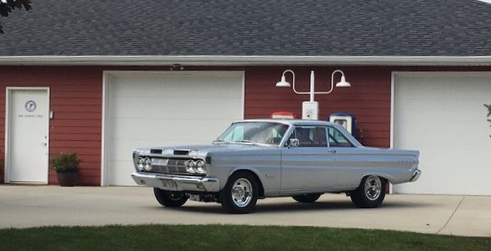 The only thing I have heard about is it is a little hard to get, but that may be fixed now.

Sorry I can't be more (any) help. But if you get it we need install pictures

Jim, you might want to check about using the stock steering, I know 2 people who bought it for that reason & then was told after they bought it they had to run the rack. I do know their products, I used to machine parts for them when they were getting started, I still know the owners & see them at shows, they used my comet to work out the comet rack brackets. John
1964 Comet Caliente 2DR hardtop 302cu C4 10.61 @ 126.68mph
1964 Comet Caliente 2DR hardtop project
1964 Fairlane 500 4 dr daily driver
1964 700 Mercury Truck
1964 Comet Ranchero
Top

John,
Thanks for the info. I have no choice but to use the '65 style steering. '64 will not work and there is no room for a rack. I am using a vintage set of JR headers and a '70 Boss 302 engine. I ran this combo when I first built the car in the early 1970's. I will confirm the steering requirements before I place an order. The reason for struts is so I can section the shock towers to gain more room for the Cleveland style heads, it was just too tight back when the car was together the last time.
I do not want to just cut the towers and weld in flat plate, my plan is to section them so they look factory but are narrower.I did the same thing with the rear wheel houses to accommodate the rear end being moved back. Everything looks factory original but it is not.
Jim
‘64 Cyclone/ Boss 302

I know you asked about 64-65 Comets,but a Friend did the RRS conversion in a 65 Falcon Ranchero,same front end as a 65 COMET.He used the stock lower a-arms and steering,no issues,car ran 10s all the time + street miles!! ROY.
Real Racecars have 3 pedals

I am with Roy. Ii was at the National Falcon club show last weekend there was a Falcon there with an RRS rack in it. It bolted to the frame where gear box and idler arm bolt in. The motor was out of the car and the alignment of the rack looked great with the car at ride hight. It looked very clean and sat low enough for a 351 windsor. My son is going to bring me a selection of custom struts and spindles to mock up on the 65 then I will decide if I am going front or rear steer rack. If it is rear steer I will use RRS.
Only use the brakes to stop and get gas.
Projects
65 Comet 421Stroker
93 Mark VIII Supercharged w/Fogger
70 Torino GT
Top

Thanks Roy,
That is the info I wanted. Do you know if they trimmed the shock towers on the Ranchero after installing the struts?
StPro:
I do not plan to use the RSS rack or control arms, just the struts. As I mentioned in my original post there is no room for a rack with the exhaust I am using.

With the strut installation done right I can make it so everything looks stock. ( section the shock towers instead of just notching them, paint the spindles, and make the springs black instead of the blue color RSS uses. ( why blue???)
Last edited by A/FX on Wed Dec 21, 2016 6:01 pm, edited 1 time in total.
‘64 Cyclone/ Boss 302

I have decided against the RRS suspension.
I purchased the comparable setup from Gateway Performance Suspension. I also went for the Baer brake set up front and rear. The parts are first class, the workmanship is great and the components are top self. Being the the car is under construction and will not be finished for a few years I will not know how the system really works for a while. I will be installing it when it comes to the mock up stage of the build but everything will be blown apart before final assembly.
In the mean time I will be having the car dipped and eCoated and doing the other suspension modifications. The 4 speed is being rebuilt, I am working on freshing up the Hurst shifter. The engine will be the next item to concentrate on, I have found a machine shop that knows Boss 302's and has done a few of them.
I have ordered quite a bit of restoration detail parts and will be ordering all the new rubber seals shortly.
I have all new power window regulators for it, which bolt in the stock locations.
The dash board gauge cluster has be updated with Autometer gauges, very subtle installed deep into the tunnel just like the factory gauges only more accurate. I am sending the plastic panel out to be rechromed and will detail the rest of the dash panel parts with new camera case material and new paint. This car has a factory am/fm radio.
‘64 Cyclone/ Boss 302