All the stuff under the car, Transmission, Brakes, Suspension & Steering
Post Reply
8 posts • Page 1 of 1

Just a question, if I run aluminized steel exhaust can I weld it ok with my MIG? Do I need any different wire (if there is such stuff)?

I think all the parts I am looking to get are slip fit not butt jointed so I don't have to worry about expanding the pipes, even though I think I have an expander around here someplace. The only thing I might have the muffler shop do is where all the bends need to go to make it over the diff and around the gas tank.

The exhaust from the header to the muffler should just be straight pipes not over about 4' long that I can fit up to the car, tack weld and then take off and fully weld on the bench, because I am running both pipes down the passenger side I should be able to weld them together with some brackets and attach everything as a unit from the engine bay to the muffler outlets, initially I was thinking of run just some turn downs on the muffler outlets and having the rest added later, for one thing I would like to see how loud it is and if I need to I can add a pair of resonators back on each side of the gas tank later if needed, when that part of the exhaust is done.

No need to change anything to weld aluminized, it just sounds different but will weld just the same as regular steel. Lap joints are typically easier to weld than butt joints with less worry for burn through, and the extra reinforcement of the pipe is a big bonus. In other words weld away!
62 Comet 170, dagneham trans, 2.8 7.25 rear 260 T5 8 inch swap planned for the future. 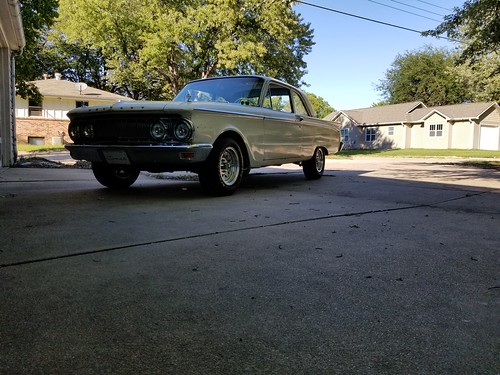 I've always welded exhaust pipe with regular mig wire without any problem. However, it does tend to corrode faster as the aluminum coating burns off near the weld. Since I live in a cold climate where they salt the roads a lot I try to avoid welding whenever I can. However this may not be a concern where you are or with your planned use for the car.

I ran side exit pipes for awhile after I intalled the 302. With glasspacks and it wasn't too loud in the cabin, unless the road had a barrier along it, then the sound reflected back at you. I did eventually swap to 50 series flowmasters with rear exit pipes.
1964 Caliente hardtop, 302/T5/8.8"

Thanks for the info guys, I think I will try it, I was going to run stainless but can't weld it yet, maybe in the future.

I decided instead of running a dual in dual out single muffler to run 2 18" glass packs side by side and run an X-pipe ahead of them, like I said if i drones too much I will add resonators later, I had glass packs on the car already and never bothered me (out the back) so may as well keep tradition alive, I was younger then of course

My dad was the one who initially wanted me to put the glass packs on and install them backwards, I may not do that this time and help it to be a little quieter

The main reason for the change is ground clearance, I am trying to tuck everything up as high as I can, I wanted to run 2" pipes but I can't seem to put together a system easy so decided to run 2 1/4" stuff with an adapter at the header connection to attach my 2" headers (so far around $150 for exhaust from header outlet to muffler outlet)

Speaking of headers (well properly header), I want to modify the stainless header quite a bit to satisfy myself so I think I will delay installing it (future project, I want to get a TIG eventually and teach myself how to use it) and use the new Pacemaker header I have and just dimple the pipe to clear the starter flange, I talked about selling that header but I will never do it so I may as well dimple it

this is that header you all have seen from my build thread.

I will try and tweak the down pipes on it first a little to scoot them out 1/2" to 3/4" first and then dimple as required, I can't tweak them out too far or they won't fit between the bell housing and body space I have to squeeze them through (see there are even times a narrow six has side clearance issues) I think I can put a pretty good dimple in there and not affect performance, it did have like a single 1 3/4" pipe there for all 6 cylinders so a little dimple in a 2" pipe for just 3 cylinders shouldn't hurt anything.

several yrs ago..on my dirt track car,,we put a 2chamber flow master turned around ,,I forget the measurements,but just so many inches from no1 cyl to the end of turn down pipe coming off the muffler....it gained low end torque over, open long tube header,,plus it was easier on my ears.....but not as much as the up draft header thru the hood that we had SHOENFIELD header makes us,,,that sucker gave out some torque,,,we welded a flapper on it like a tractor ,,but the brkt kept breaking and one night it fell off on the track,,so we finaly just took it off,,,beside other racers were crying about it,,,,boy it was noise free behind the whl….in a super quite cab you are sure to watch the tach,,,cause you can't hear the engine much.... pop

Hey Mike, speaking of dents in headers and exhaust pipes, you've seen that video where the engine guys smash the heck out a set of headers, with the engine on the dyno and for the most part it doesn't any difference? I can't seem to find it, but if you look you will. I'm no engineer or even a rocket scientist, but it seems a few small dents don't really do much. Others will have more informed opinions.

Groover wrote:Hey Mike, speaking of dents in headers and exhaust pipes, you've seen that video where the engine guys smash the heck out a set of headers, with the engine on the dyno and for the most part it doesn't any difference? I can't seem to find it, but if you look you will. I'm no engineer or even a rocket scientist, but it seems a few small dents don't really do much. Others will have more informed opinions.

Yes I have seen it, it is Engine Masters, they really made some ugly sets in those headers, same guys that tested how much HP a water pump mounted fan robs.

I wish I had a torch so I could heat them up a little before attempting to add some curves and dimples to them.

I changed my mind again today about putting the mufflers under the rear seat pan, because the car is lowered I think I want to just put the glass packs right up next to the gas tank on each side like normal. I did not even think about the frame being higher there so they would be tucked up higher off the ground.

The only issue is I will have to go ahead and get the pipes bent for over the rear axle and I can't add any more resonators if I need them so it will just be the two 18" glass packs (22" overall), which again I think that is what was already on there, the old ones are laying out behind the shed i can go out and measure them tomorrow and see what they are.

I want to go ahead and lay them out while the car is flipped up so I may pick up a few 2" pipe fittings (the pipe I am using is 2.25") and make a set of patterns to have bent, I don't think I want to try and weld up my own right now with mandrel bent pipe so maybe I could take the patterns to the muffler shop and have them bend me a set I could install.