This is the earilest pic I have of Sassy!
Taken in 1974-5 it is in front of our first house.
I think it's high enough to called a 4x4 but
that is the way it was. Deep 8" chrome slots
stickin out of the cut up rear fenders .
Had to use shackles and air shocks to get it that high!
Thats the way I bought it from an 18 year old kid,
after all I was 21.
I will post lots of pics here so we'll see how fast
your internet is!lol
Fred

Do you relate?
In the early 60's I used to get little tin toy cars for Christmas and
my birthday. They had wind up motors in them and would zoom
across the floor, great fun,,,,,,for about an hour! Then , BROKE#^(*
Well thats when they needed to be repaired. So, armed with a
butter knife I proceded to unbend all the little tabs, usually about
1/2 of them broke and had it ALL APART in notime atall.
After dickin with it for an hour and usually cutting my finger DAD
would come to my aid. He could make it work abit, say something
about made in Japan and that was the end...
Well I never got over that take it apart syndrome and about a year
after we bought the Comet there it was all over the garage floor!!!!!!!!
But now I had to put it back together cause Dad got fed up with my
syndrome,
In this 77 pic it made it back to the lite of day and more importantly
the drag strip!
Pretty red paint GONE custom interior GONE 289 GONE
351C 4speed 456 gears Color me GONE!!!!!

During the next few years of racing I also learned how to put the red
paint on a car. I even found a guy that wanted to sponsor my habit!
Now I never did quit street drivin Sassy so it did stick out a bit on the street!
It's amazing now that I think about it, more than once this car cruised our local
street scene open headers, wrinkles and the only tickets I
remember getting were for racing and no e-brake!!!
In it's day it was hard to beat in a rolling street race.

Well I raced a few years and couldn't afford to go any faster.
So I ended up back on the streets. I had gotten decent at
painting cars on the side and a buddy with a 11.30 Maverick
with FE power wanted his car painted and I wanted a pro- street,
a deal was born! I painted that Maverick

and Al narrowed the
rear and supplied 15x10 and 15x4 Cragars. This was one of a
few tubbed cars around my home town so it stood out! Now by
todays standards its not much but N50s on the back were
pretty big time back then.
The pics were actually taken in about 2000 but after 15 yrs of storage
Sassy looked the same as it did in 1980. (Life can get in the way)
Fred
I know,I know, highbacks and wheelwells ,,,,,,UGG!

WOW! That is really cool! I LOVE the tubbed pics, and it is realy cool to see the car through the years. so what engines did you ahve in it? At least a 289 and a 351-c, how did you wedge the cleveland in there? That was before the days of the crites shock tower kit!!!
Thanks for the story/pics, i really enjoyed it.

You put th engine on a chain and start lowering.
then its just take the part off or cut the part off!!
Honestly that was about it, the ex, manifolds were
the first things removed then we cut the ribs off the
the towers. The fellow that did the welding and cutting
for me was good about making it strong but not so
much about clean but hey,,, it fit!!!
My buddy Al had a tire shop and the 11 sec Mav and helped
me get a set of headers to fit (sort of) I think they were
headmans for a 70 Mustang.
The C was out of a 71 Stang ,Hi compression(10.7-1)
4bbl so it was pretty peppy stock then we put a set of
456s in the back(right now I want to use a swear word)
did it go!!!!!!!!!
Then a big hyd. cam Strip dominator and 750 Holley
YAHOOOOOOOO
WER HAVIN FUN NOW!!!!!!!!
The cam lump at stop light,,,,, ya
Radio?,,,,,na
When I sit and think of those days its just a SMILE!
But there was some challenges, like the time I came
home on payday an told Marilyn the paycheque went
to pay for work on the car,,,,, But today she won't let
me sell it.
I broke everything behind the motor at 1 time or
another but never that C and on the missed shifts
I seen the tac at 8G more than a couple of times!!!
Anyway its under the bench now retired.
I picked up a smoger 351C and used it to pull our
Boler camper for a few years around 2003 then in the
fall of 05 I started on the SC

The reason for the extra set of mount holes for the upper control
arm will become obvious later.

I have a Cleavland in my 65 with totally stock shock towers. It fits. I got headers back in 94 from total performance in Detroit. They take all day to put on but it does fit. The headers are 8 individual pipes bolted on one at a time, then you slide the collector on. Two of the pipes cross under the motor to the other side. I looks wild but it works. To change the plugs you have to pull the valve covers to be able to reach the middle ones.
1965 Mercury Cyclone former drag car, 1971 Boss 351 engine, 4 speed, ladder bars.

I bet it looks cool !!! with the valve covers going tower to tower.
Yes we may have cut a little much but I could change the plugs
with a 3" extension on the ratchet in about 5 minutes!
Back in 1975 when we did the swap I had no clue and cutting
the car was no big deal like today.
Ya the headers, man I ordered a catolog from Tubular Automotive
out of NY (Ithink), same idea 2 pipes xrossed under the pan, but
by the time I would've had them in my backyard they would have
cost as much as the car,,,wasn't gonna happen. Back in that day
in Saskatchewan (don't worry only people from there can pronounce
it LOL) Canada most of us were pretty bush league. But ZK,
( Zenon Katalko) from my home town did hold a NHRA national
record in SS so the info was around. Anyway I was havin fun!!!
Fred

Fred;where does it say thou shall not cut?I never saw the note!!!! ROY.
Real Racecars have 3 pedals

I am not against cutting but, $250 headers at that time seemed easier than cutting. Now that I am older (I was 26 when I first put the Cleavland in) I wish the towers were cut so it would be easier to work on. It takes me all day to put these headers on. Usually about an hour per pipe. You can barely reach each header bolt and can only turn the header bolts about a quarter turn at a time. I just said it would fit for those who don't want to cut their cars.

Here is a picture of mine, obviously "cut up" out back with ladder bars and moved in leaf springs. 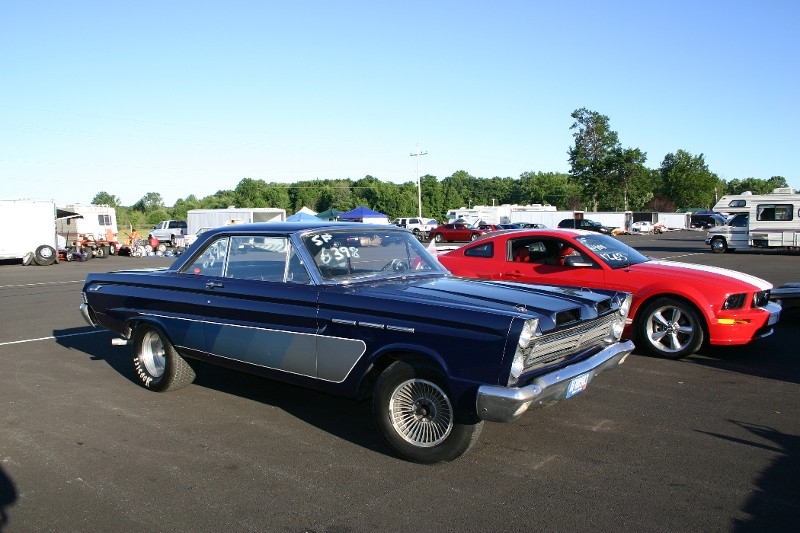 Boss;I was just giving Fred a load,I went years without cutting my 65.I got a load of S--- at a Mercury show for cutting up my Comet.The guy had a restored 65 Caliente,chalk marks,tags on everything,the whole numbers game,great car,guy was a complete JERK!!!!I love a nicely restored car but to me the car is yours,do what you like and enjoy YOUR car. ROY.
Real Racecars have 3 pedals

Re: Let me start

CALIFORNIA CALIENTE wrote:Boss;I was just giving Fred a load,I went years without cutting my 65.I got a load of S--- at a Mercury show for cutting up my Comet.The guy had a restored 65 Caliente,chalk marks,tags on everything,the whole numbers game,great car,guy was a complete JERK!!!!I love a nicely restored car but to me the car is yours,do what you like and enjoy YOUR car. ROY.

I agree 100%. I love cars that are loved by their owners. I appreciate the effort, whether it is a concours restoration or a modded hot rod.

I have had a bunch of people say to me "I can't believe you cut up a real Cyclone". Usually they are saying it to a friend just loud enough for you to hear without having the guts to actually say it to your face.

Well know that we're all on the same page
and everything is clear as mud.
So 2- 65 Comets in the 10s I smell a race
too bad your so far apart, whats 1/2 way
Oklahoma?
It sounds like the 3 of us are long term owners!
Fred
PS
(I can't believe those 2 guys cut up those 65 Comets)
LOL
Top

SASSY wrote:Well know that we're all on the same page
and everything is clear as mud.
So 2- 65 Comets in the 10s I smell a race
too bad your so far apart, whats 1/2 way
Oklahoma?
It sounds like the 3 of us are long term owners!
Fred
PS
(I can't believe those 2 guys cut up those 65 Comets)
LOL

Well Fred, I am definitely a long term owner! How about an all Comet event in say Missouri or something?

(lavron are you listening?) It would be fun to go to an event and see more than 2 Comets.

As for a match race, I bow to CALIFORNIA CALIENTE for now. If I can get it really running and make it close then it would be fun.

Boss, I am always listening.

I'd love the opportunity to "criticize" your cut up Comets, you know I would never cut up a Comet

Seriously, you guys are great, someday maybe we can all get to a face to face