I replaced my autolite 4100 carb with a new edlebrock 500 cfm performer carb from jegs. Much better performance ,response ,all around very good . anyone else make this change?
Top

I've used Edelbrocks on several projects. As close to worry free as I've ever found on a mild engine. 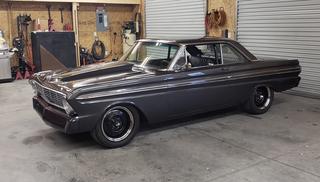 I was very interested in your post on the Edelbrock carb. They are a fine carb but as any FORD nut will tell you the 4100 is about the most PERFECT carb ever made when used correctly. The problems and bad reputation usually stem from misuse. Big block 4100s which are cast with 1.12 on the bowl and designed for 352 through 428s simply will not perform on a small block which are cast 1.08 and designed for the 289s. There are exceptions to this however, as HI-PO 289's and some CYCLONE 289s came with special 1.12s. Also, in my experience rebuilding these carbs I've found that they are not only model specific but year specific as well therefore a user should be aware of the FORD parts number stamped on the carb base. Things began to get a bit "dicey" in 1966 when the idea of smog and pollution began to enter the field. So, the old adages that "one size fits all" and "bigger is always better" simply are not true here. I have rebuilt dozens of these fine carbs along with their little sister the 2100 two barrels and for simplicity and rock solid performance they are unbeatable.
I hope this sheds a little light on a much maligned piece of technology. Does anyone else have a viewpoint on this? Jump in ok!
Kind Regards to all, TOM
Top

I didn't even know Edlebrook made a carb

Had to google them,, CARTER,, think I only seen those on Mopars back in the day.
Back in the 70's & 80's I drag raced and circle track, Holleys were all the rage then.
Had quite a few of them threw out all the carb stuff years ago.

got a pair of man choke 500's on my comet that has been on it for several yrs,right out of the box,the only gripe I have is if I don't start the comet every couple of days,it will crank over like it's lost it's prime,,but that could be from me not having the choke operating.,,other then that ,seems like they work fine......good luck with yours ...POP

Pop you probably shouldn't blame the brand of carb for that, all of my carbs do it. Maybe it is either this corn gas or maybe they have always done it, & we just never use to let them sit for very long

the one annoyance the eddys have for me is the hesitation when you floor it. I tried to tune it out with no luck. on my auto trans truck it doesn't bother me, but if I flogged my car & went thru the gears I would get 4 bogs ,one every time I let up to change gears. I put a 4100 on it & after some tuning I got it running pretty good & never switched back. But for cruising & most any other kind of driving I really liked the edelbrocks. But you can't beat a proper tuned 4100 either!! I run a 1.12 on my 347 & after some tuning it does great. One thing I did notice with the 4100 is the float level is key to tuning it. even after you rejet it, you can toy with the float settings & fine tune it to different jets , or at least it seemed like that to me.

popscomet wrote:if I don't start the comet every couple of days,it will crank over like it's lost it's prime

I have an Edlebrock 500 on my 302. It runs great, but I have the same problem with it "loosing its prime" if I don't crank it for a week or so. I usually give it a shot of starter fluid just to save wear and tear on my starter and battery if it's sat for a while. Once it starts, it will restart with just a bump of the switch three or four days later. It's not a corn gas issue because I only put ethanol-free high test in it.

I have a friend who put a 500 Eddie on his 289 Falcon right out of the box and says it runs great. Never turned a screw on it.