Clear off a spot on the mantle cause you'll be bringing a trophy home,probably the biggest one.

Jim,,, ya know guys that dont know the English language that well, they see something like your car and stand there gawking with their mouth open and sluring a 4 letter word in awe ,,,ya me
Fred
I'd rather do it myself if it's done right or not,,,isn't that what hotrodding is all about?

It’s been a couple of weeks since my last post. The maiden voyage for the Comet was to a street show in Union Grove, Wisconsin. (Home of Great Lakes Dragaway) The Show was well attended and I was able to park in the main intersection, I think the car was well received.
Since that day I have changed the braking system, I was not pleased with the way the brakes worked. I decided to remove the combination valve that I purchased from the same place that supplied the master cylinder. When I bought the parts they said that the MC and valve were what I needed for the Baer four wheel disc brakes. Well, they were wrong. I removed the combination valve and installed an adjustable proportioning valve, I had to redo some of the plumbing but after bleeding the system and adjusting the valve to balance my system the brakes now work as they should.
This past Monday I drove the car to the shop that built the engine, they strapped it to their dynamometer and checked the air/fuel ratio. As it turns out my carburetors were too lean, I brought the car home and rejetted the carb’s and reset the float levels. We then put the car back on the dyno and the mixture ratio was where it should be during idle and normal driving rpm’s.
When I left the engine shop the car developed an issue, all of a sudden it lost power and died. I pulled over and after a while I was able to fire it and make it to a gas station where I looked at everything but could not find the problem. It fired again and I drove a couple of miles and it started to act up again, I was close to my friends house, he has a shop and I figured it was a good place to diagnose the issue. (I was a partner in his shop for over 20 years before I built my own place) I still was unable to find a problem so I decided to drive the 12 miles to my shop, my friend followed me just in case. The car ran perfectly. I decided that the issue was vapor lock, it was a high humidity day in the 90’s so it made sense.
I removed the carb’s and installed some spacers under the carb’s, this sounds easy but it entailed installation of new carb studs and a few other things. I drove the car and the issue was gone, problem solved. Not quite, with the ½” spacers the air cleaner stud on the front carb hit the hood so I ordered some ¼” phenolic spacers and installed them. ( with different studs, etc) So now everything is good.
On Saturday I drove the car a total of about 80 miles to and from a picnic that a friend hosts every year for “cool cars”. The car worked well and made the drive without issue. I have a few items to dial in but for all practical purposes the build is complete.
In about a month there is an event called “The Hot Rod Hundred”, it is a 100 mile drive for pre 1968 modified cars. I have signed up and plan to join my friends driving some of the scenic backroads of Wisconsin.
I want to add some miles to the car before the weather closes in on winter, if any issues arise I will have the winter to correct them.
Jim 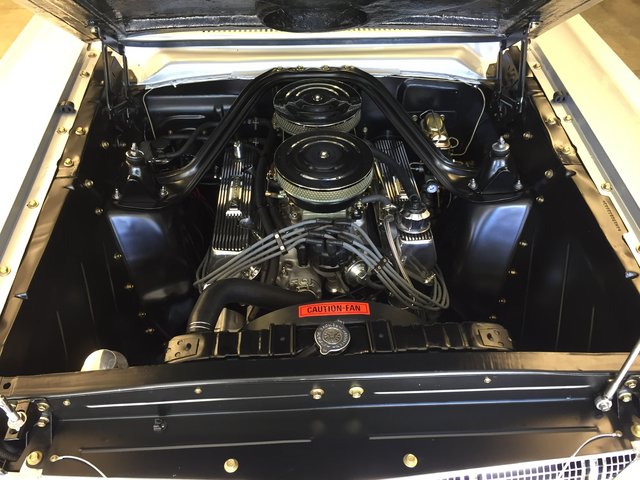 Glad to hear you got it worked out, I know I have some (a lot) of the same in the future for myself

Love the pic of the car in front of the garage, every time I see it I think about how clean it looks and a perfect presentation nothing overstated.

I agree with Mike. It's beautiful to look at, and has that "walk quietly, but carry a big stick" look to it. I'm sure you are, and should be, very pleased with it.

Looks great Jim!
How 'bout recreating the pic from the cover of
Street Machine, however many years later,, ?
Fred
I'd rather do it myself if it's done right or not,,,isn't that what hotrodding is all about?

Thank you guys for all the kind words. It’s been a long time coming but it’s been worth the wait.
Fred, as for recreating the cover shot, I could find someone with a Mustang II, and look for a location that looks like the original location, (which was in Tulsa OK) and ask my wife to wipe down the Mustang while I clean the Comet. (She was in the original picture which was taken before we were married) It’s a good idea!
Jim
'64 Cyclone
Top

I have been putting a few miles on the Cyclone in the last couple of weeks.(as the weather and time allow) I have about 400 miles in it now so it is time to drain the break in oil and replace it with 10 quarts of Valvoline VR-1 and new Wix filter. I was not pleased with the jetting in the Holley’s after running it in the dynamometer so I borrowed an air/fuel gauge from a friend and installed it with a temporary mount and wiring. The gauge told me that now the engine is running slightly rich at idle and a few points too rich at certain RPM’s. In the last couple of days I have rejeted the carb’s, reset the float levels in both carbs, installed new spark plugs, and changed the 160 thermostat to a 180. As soon as the rainy weather clears I will do a drive with the gauge connected to recheck the carb tune and adjust as necessary.
This Saturday is the Hot Rod Hundred, I want the car to run good for the event. Between driving to the starting point, running the event, and the drive home it should be about a 250 mile day.
Jim 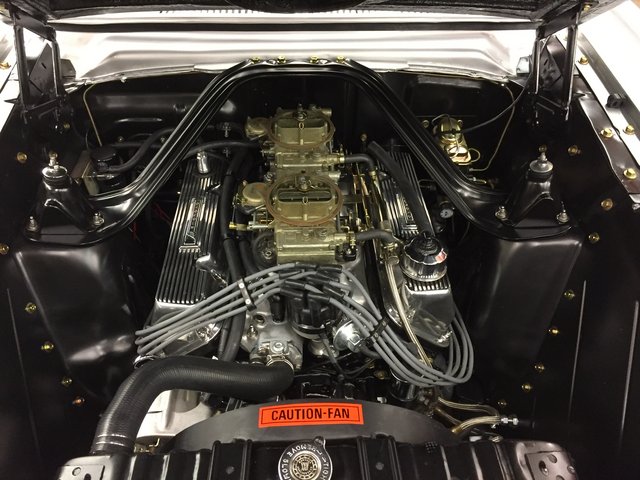 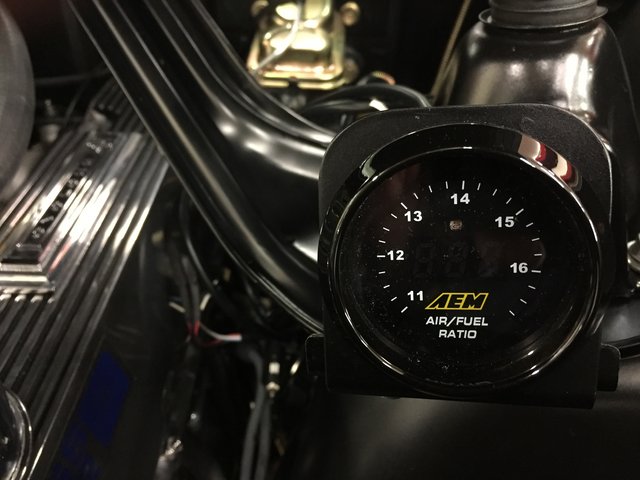 All cool to hear

How do the Air Fuel ratio gauges hook up? certainly, my car is going to have to go through a time of tune when I finally get around to installing the new intake system.

How do the Air Fuel ratio gauges hook up? certainly, my car is going to have to go through a time of tune when I finally get around to installing the new intake system.

Mike
The gauge connection is quite simple. First you need to install a M18x1.25 bung in the exhaust pipe. They are available from Summit for a few bucks, it must be installed per the instructions so it reads correctly. The only other hook up is for 12v and a good ground. The gauge and O2 sensor are quite pricey depending if you by a digital or analog style, I was able to borrow one from a friend. I have given some thought to buying an AutoMeter gauge that matches my dash gauges and installing it in the glove box, I don’t care for under dash mounts.
Jim
'64 Cyclone
Top

I have a question for ya, concerning the dual quad set-up.
What jet size did you settle on?
My 289 has a lot of potential down the road. Would first have to upgrade the driveline to handle the extra HP.
Slowly working on that now. Taking it easy on the RPMs, already on the edge.

I have a question for ya, concerning the dual quad set-up.
What jet size did you settle on?
My 289 has a lot of potential down the road. Would first have to upgrade the driveline to handle the extra HP.
Slowly working on that now. Taking it easy on the RPMs, already on the edge.

Joe,
Right now I am running 54’s in the back carb and 55’s in the front carb. I am sure your setup will be different because I am using Cleveland heads, special pistons, and a stiff cam. I am using the gauge to determine the A/F ratio but I am still reading the plugs and looking at the tail pipe color.
Jim
'64 Cyclone
Top
Post Reply
127 posts