The new plaque looks good! I also really like that AC, that one is in nice shape!

Looking good!! That AC is about as good as they get nice score

You get that AC in and you are cruzin' in style. Wish I had one yesterday... and today... and tomorrow... and every day until October

Johnnie that emblem looks great. The w/o is goin to be awesome to have on those hot summer west Tennessee days.
302 roller
4 speed
Real cars are built to be driven and driven hard!!!
Top

AC project snowballed into several different changes. stuff I wanted to have done before I gassed up an ac system on top of all of it. 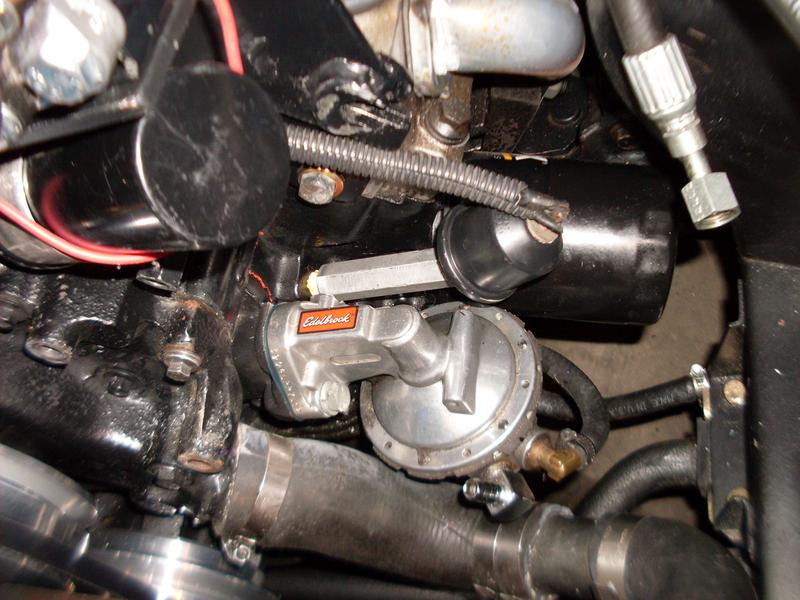 little things like putting the correct fitting from block to oil sending unit, change & re-route fuel line.Also moved the coil around to 2-3 places & it finally ended up on the intake. 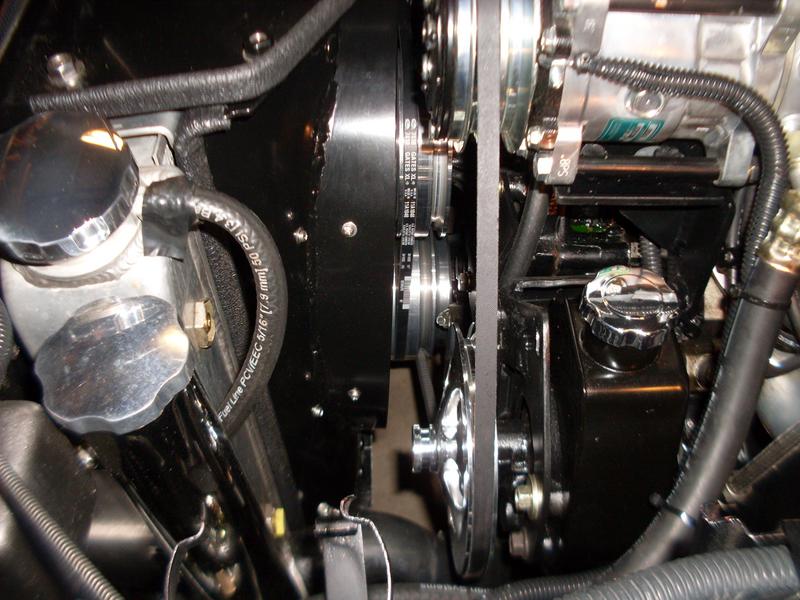 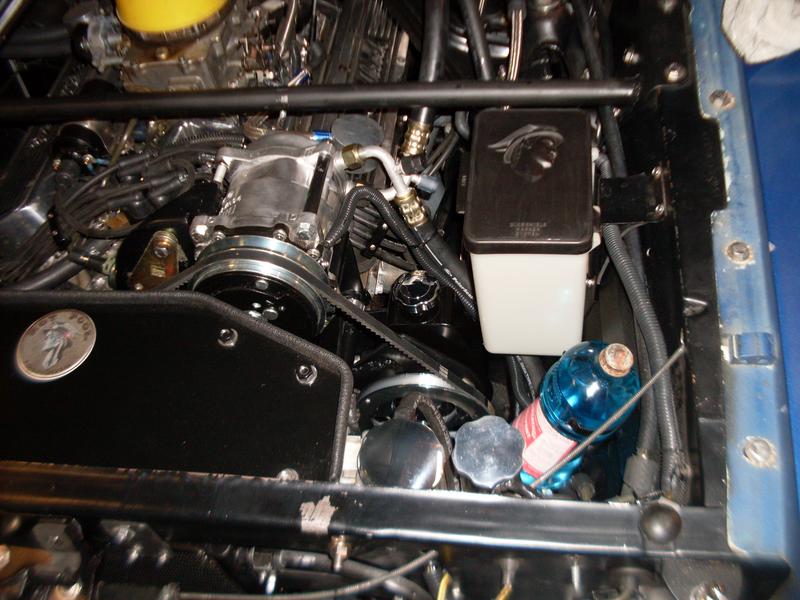 Borgeson Ps conversion kit uses a saginaw pump & recommend it if you don't get their kit with it. but they sell a hose set for ford pumps for stubborn guys like me who bought the ps box only. having a ford pump already onhand helped sway me to go that route. but I never have liked how their ford pump hose was so close to the header & shock tower. Then after reading about lots of guys who do a saginaw swap in their 70's 4x4s with big tires. And Ford used them in lots of vehicles, but it always had a chevy look to it but I finally gave in . I found a mid 80's Ford E-250 van Ps pump bracket for saginaw pump, & ordered a rebuilt pump from oreilys for an 85 E-250 van. It ended up being a worthwhile effort, I really like the way it feels when driving,& much smoother at low rpm.

Of course I needed a new PS pump to sector hose. I bought the braided russel lines & fittings cut to fit/make your own. so far so good.no leaks.

Also had to move my ps cooler & lines to the passenger side,since the ac condenser now had to go in. 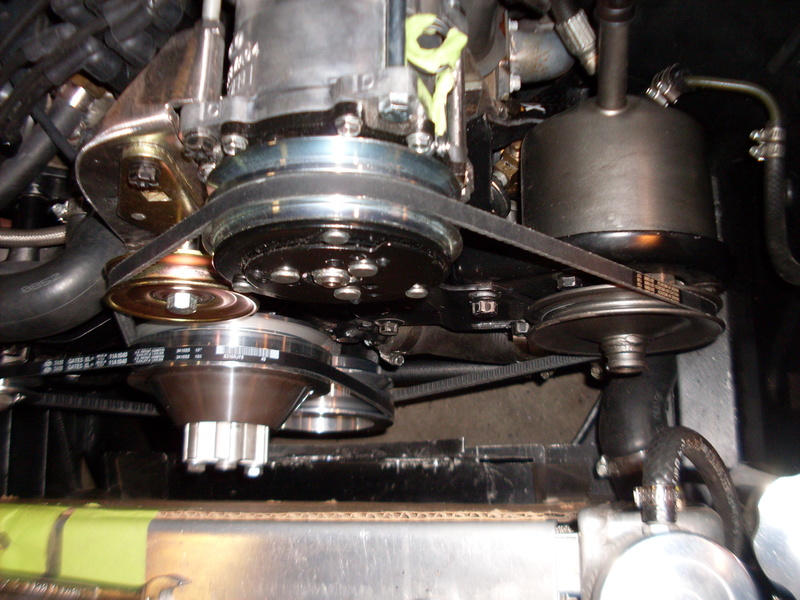 New pulleys were needed so I could set up the AC pulley to share the PS belt. This new route left no belt wrap on the WP pulley & so is the reason for the pulley change. now the Alt belt runs the WP. 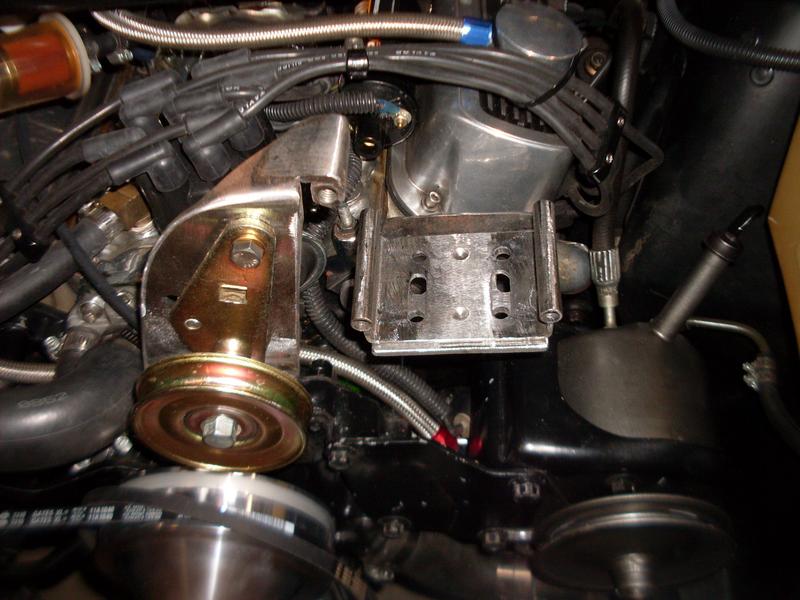 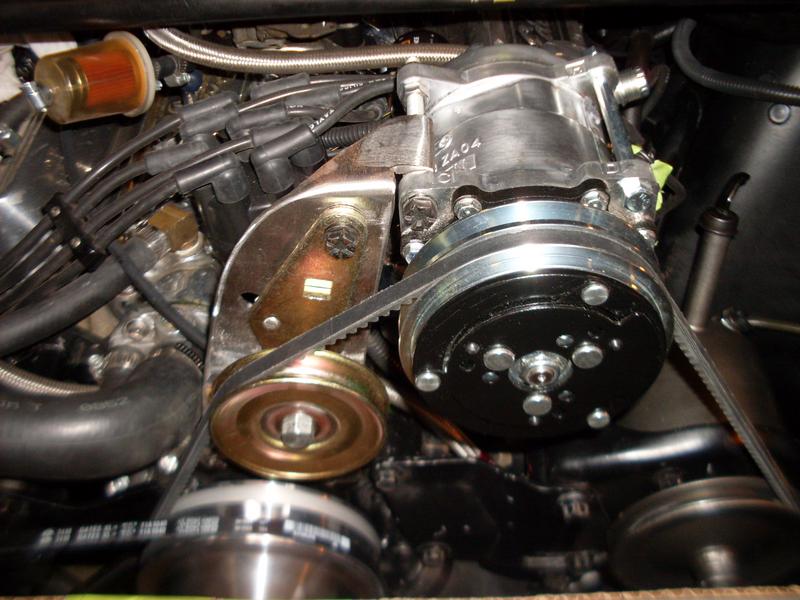 I made compressor brackets just because I didnt see any I really liked. An L shaped piece to bolt to the head, a piece to bolt to bottom of compressor & another piece to steady it from the top & hold the tensioner pulley. I made the brackets so I could adjust the comp in & out to align pulleys.

While I had the hood latch, & grill out for the condenser install I made a hood latch lock that I've been meaning to do. I've had the underdash hood pull handle & cable mounted since I got the car running, just hadn't made the latch part. 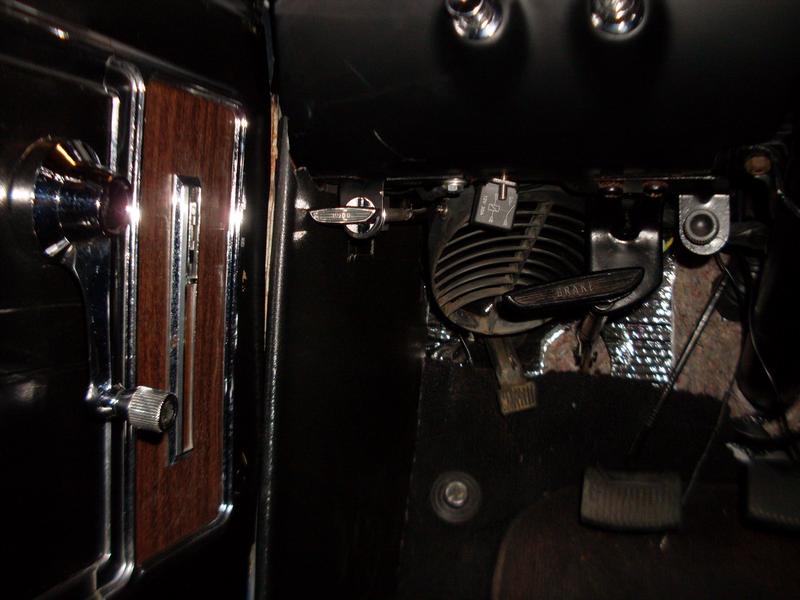 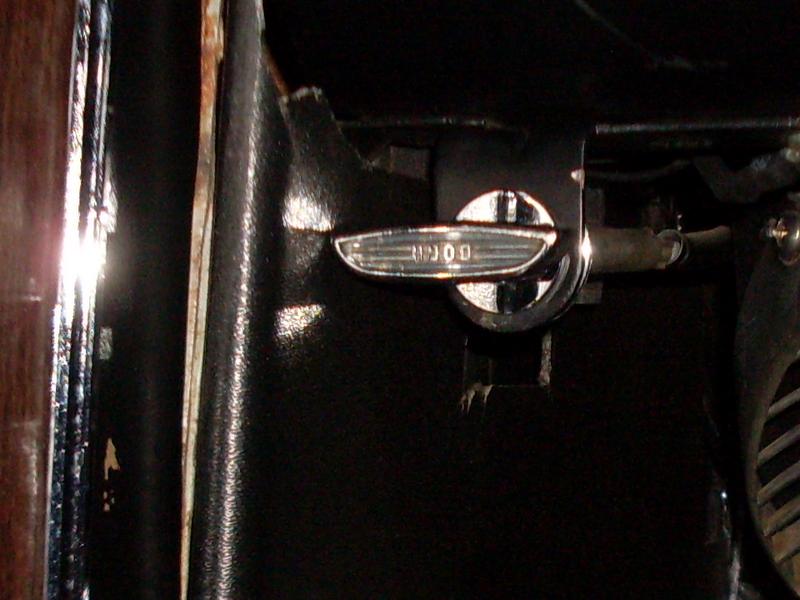 you can see the cable & also new ps cooler location. 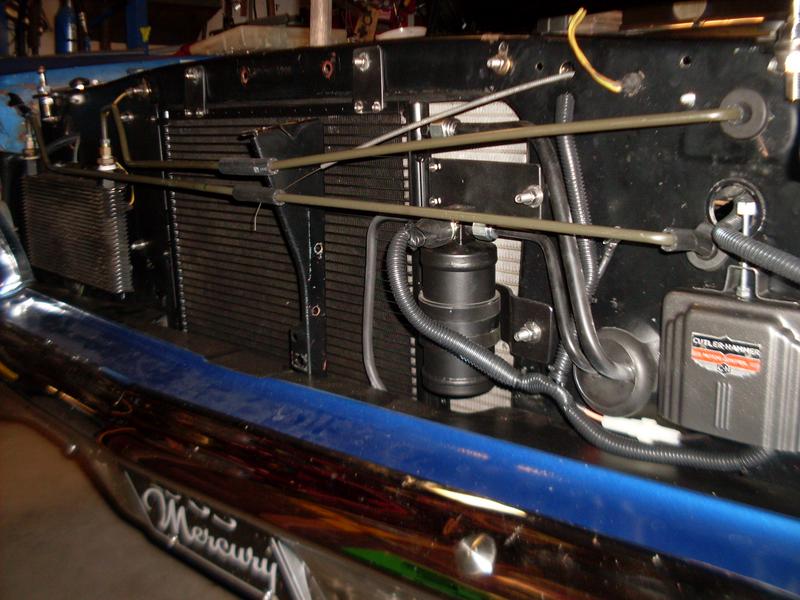 made the latch lock pin from a bolt & piece of tubing, with a set screw to hold the cable. 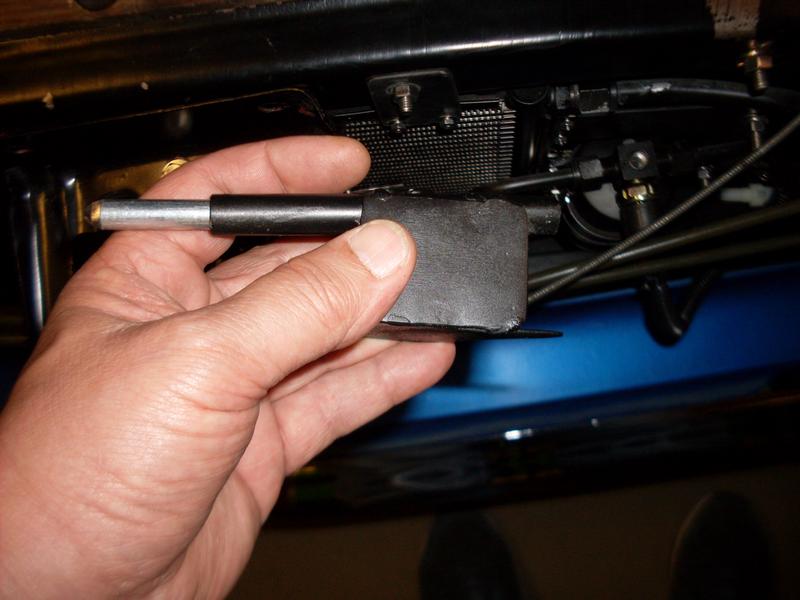 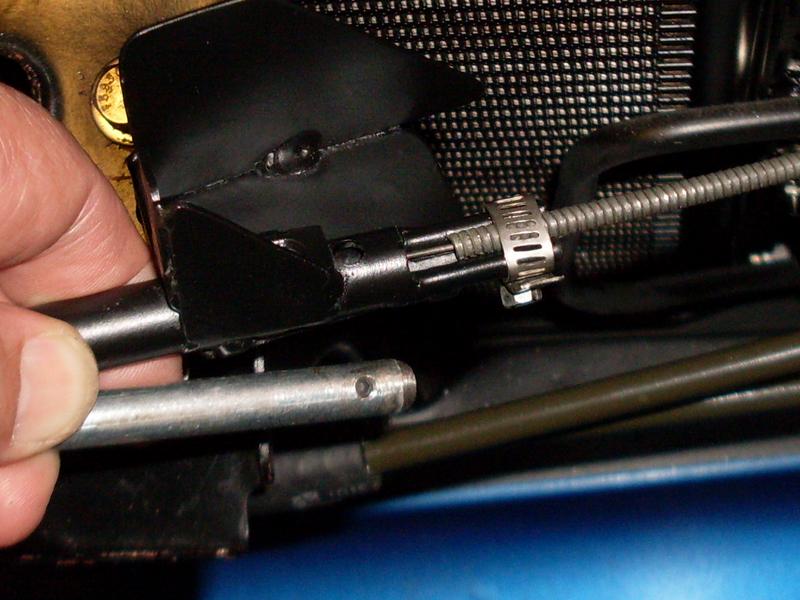 latch lock bolts to the latch brace that goes down to the frame. goes thru it & enters the latch behind one of the 2 safety hooks so it cant open. also goes thru the main latch so it locks both parts of the latch. 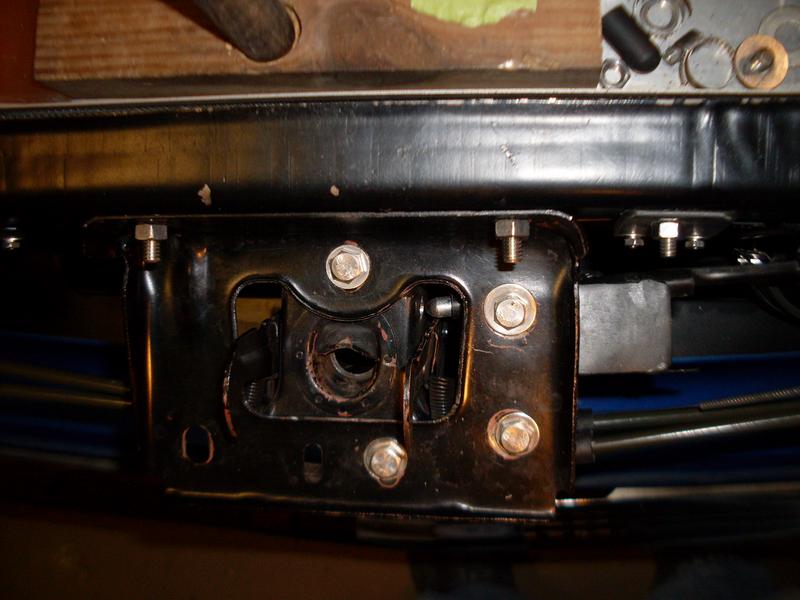 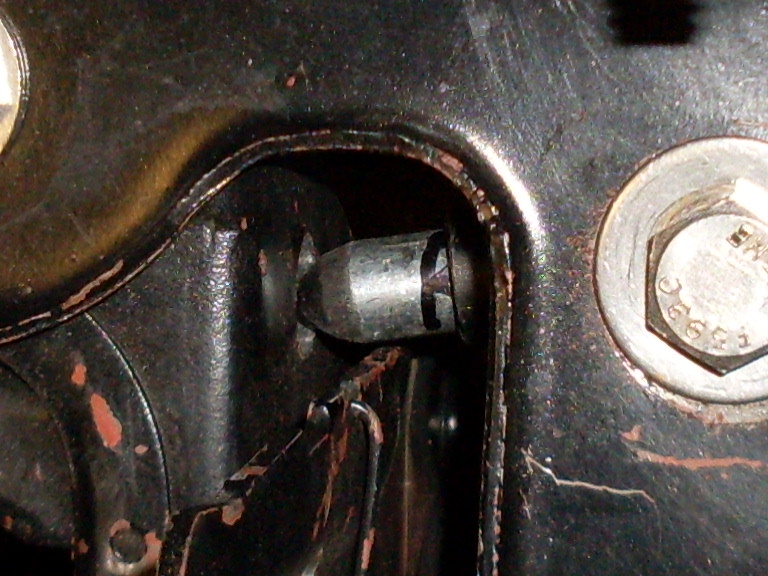 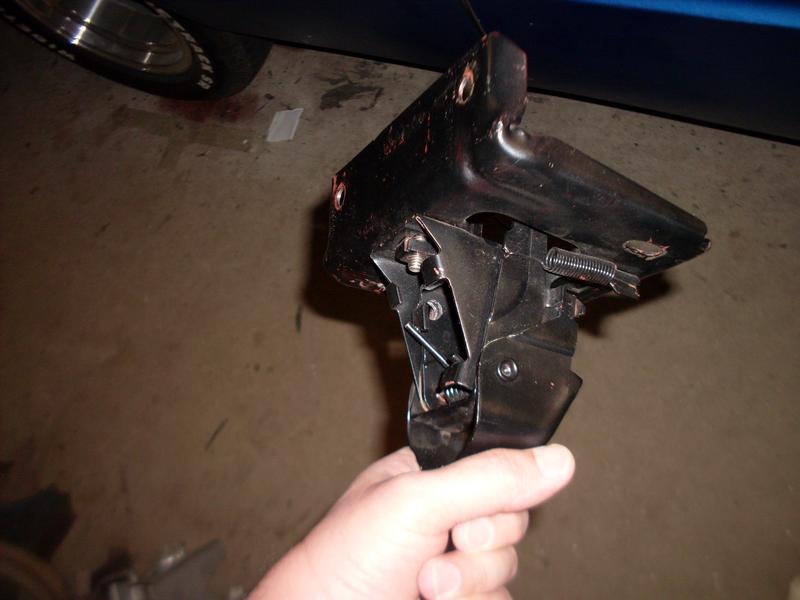 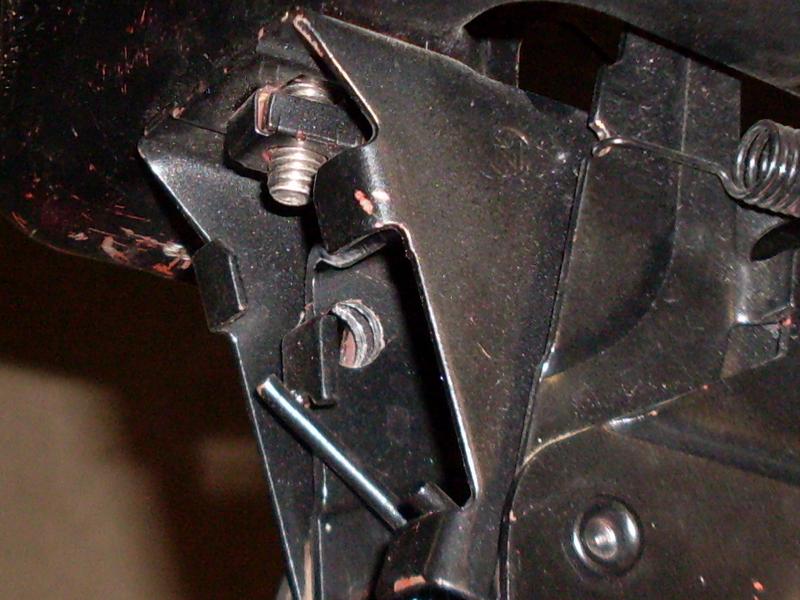 Here you can see the holes for the lock pin,it goes thru 2 layers of the latch, one of them is stationary & doesn't move the inside layer is the main latch

I'm glad to have all that stuff done now . The steering is smoother at low speeds & seems smoother all around better & quieter.

Ac is pretty much done except for gassing it up. If it doesn't leak down over the winter I will finish wrapping the expansion valve with cork tape.
Last edited by poboyjo65 on Wed Jun 06, 2018 11:46 pm, edited 3 times in total.

'tall looks good to me.

Darn nice work John. I never liked the idea that anyone could just come up and pop the hood if they wanted to

Your latch is a great solution. Everything looks good!!

Thanks Groover & Joe. Joe I was thinking someone might think that it is an original proto-type hood & steal it.

Looks good John. Always like seeing you updates, and how well planned out your modifications are.

The hood latch/lock, is it spring loaded or pull to unlatch push to latch?? Either way cool idea!

Thanks Lou & No it isn't spring loaded & doesn't un latch the hood,,,,it is just a lock .it slides thru & jams the latch so it wont open. & doesn't have to be locked all the time, the knob isn't in the way when it is pulled for unlock.

As usual, it all looks great.
Jim

No doubt - brackets look great, hood lock is sweet...good stuff. You’ve done a damn fine job filling up all the space there ain’t under a Comet hood, very cool!!

poboyjo65 wrote:Thanks Groover & Joe. Joe I was thinking someone might think that it is an original proto-type hood & steal it.

Awww man don’t tell me that!

Thanks JH & Jim. It is crowded under there. Everything has to be strategically placed or problems arise, & do anyway. Most of the time I dont have the washer box & bottle in there because it gets dirty but I can pop them in for looks.

more pics of ac install. made mounts for condenser. & instead of ordering & waiting on one I made a grommet out of a piece of rubber & cut a piece out of an old chrome oil cap for the hard lines to go thru the rad support. 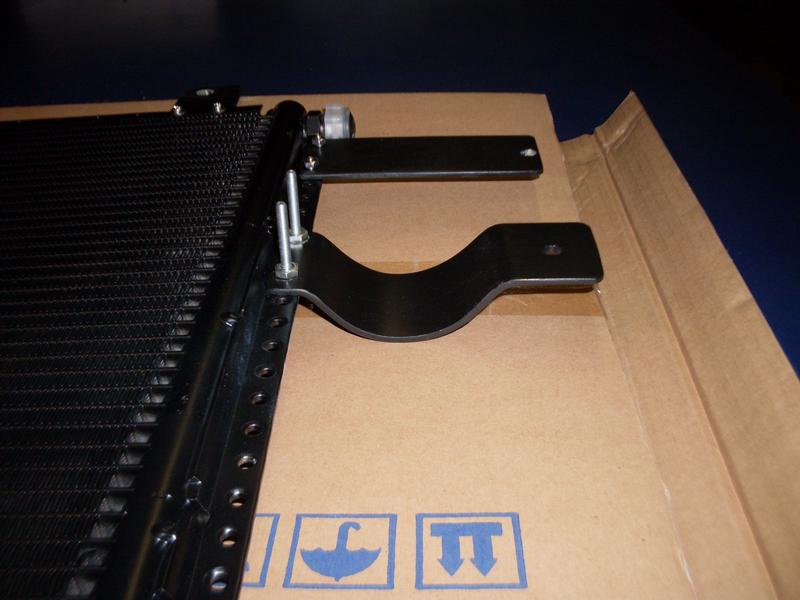 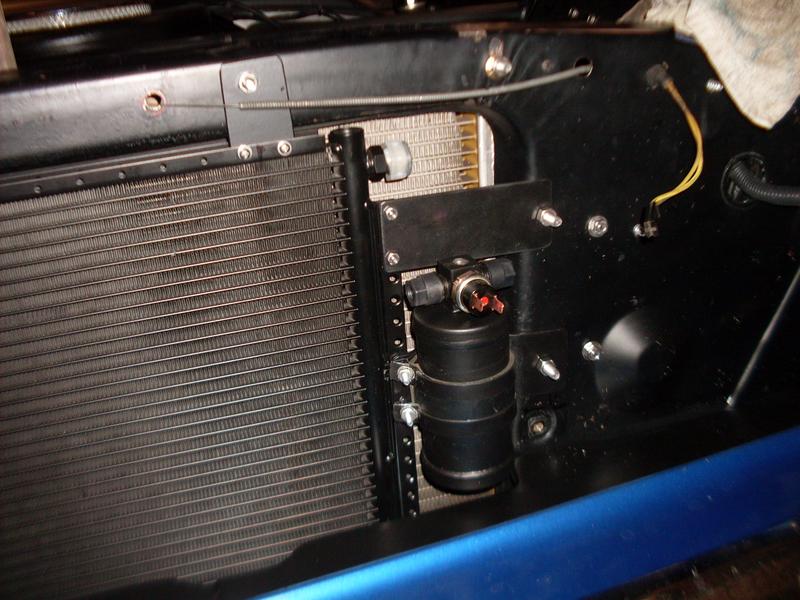 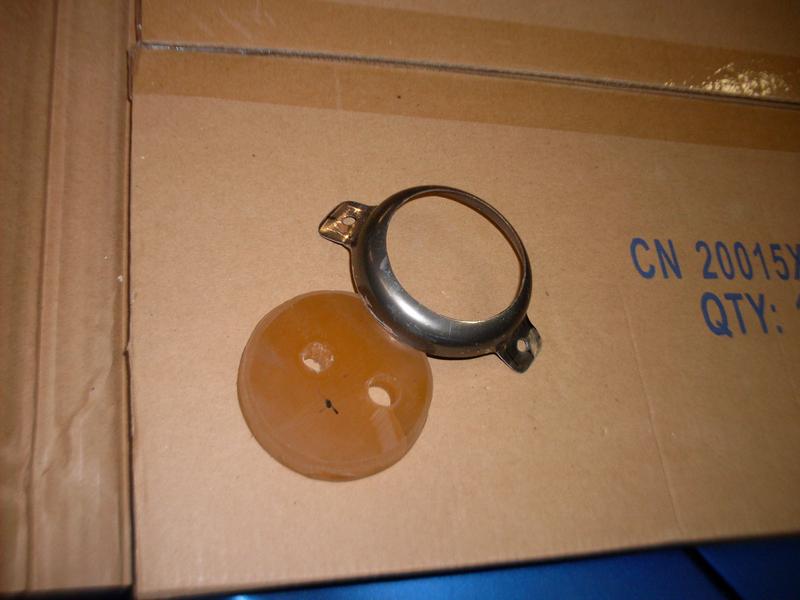 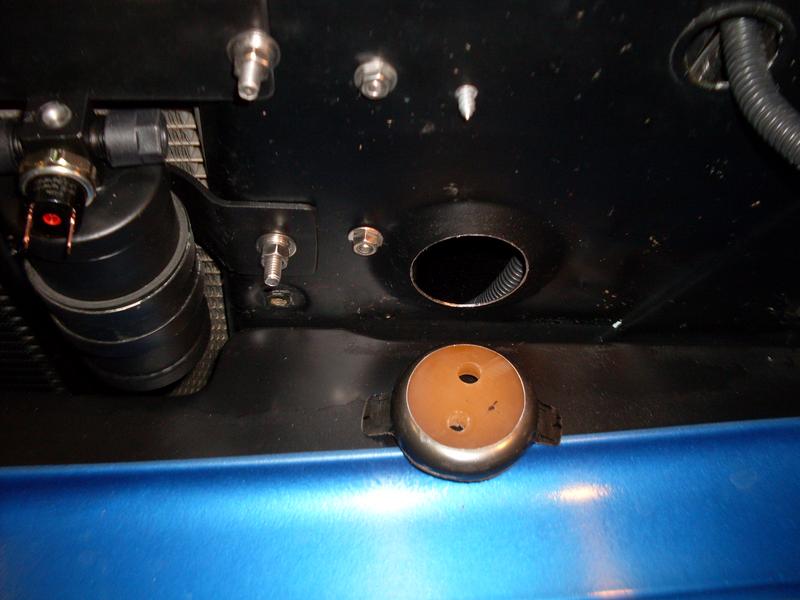 It was so crowded I decided to put the ac relay out on the rad support next to the new grommet. 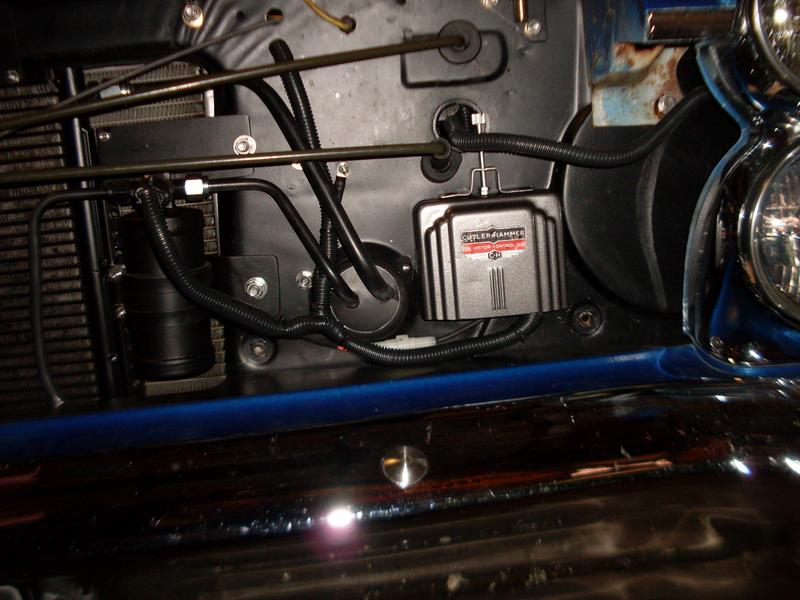 I made a cover for the relay out of an old wood planner motor switch. it has room for a couple more relays for the head lights. one little knob at the top holds the cover on. 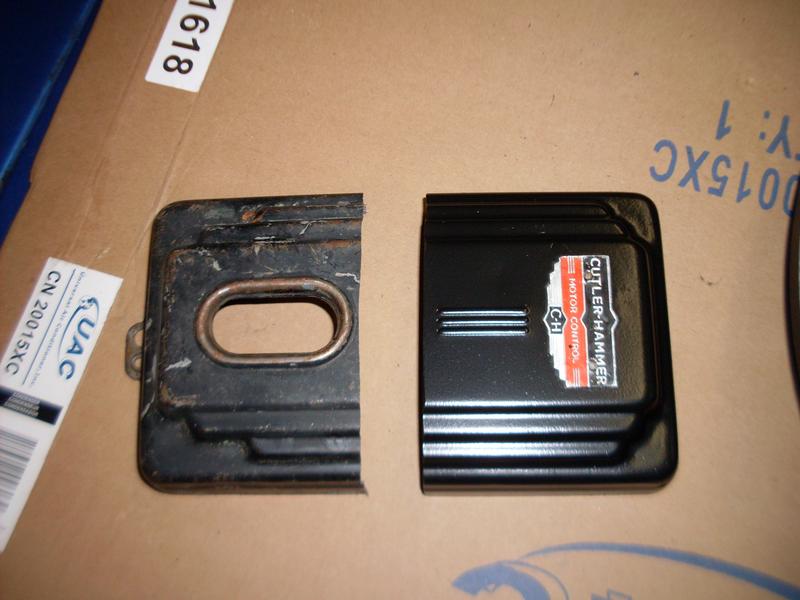 The underdash unit was clean on the outside but it sure did need cleaning on the inside. 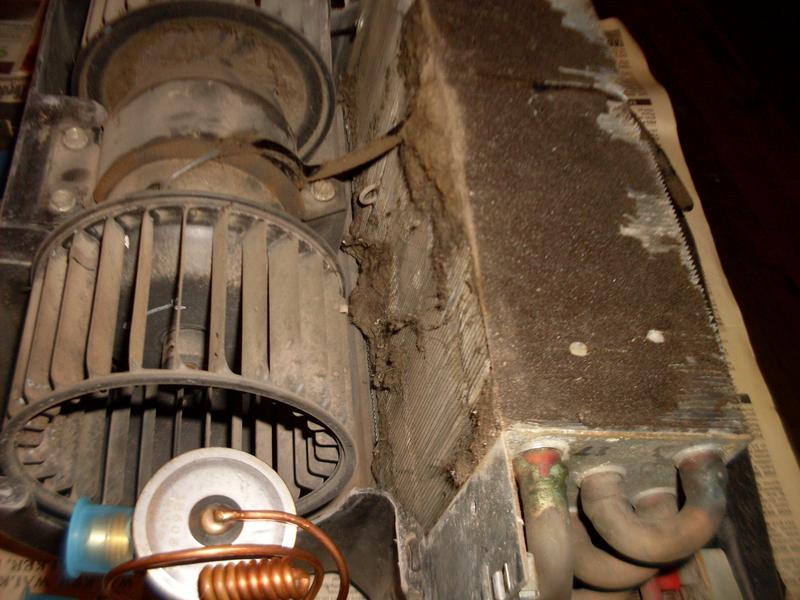 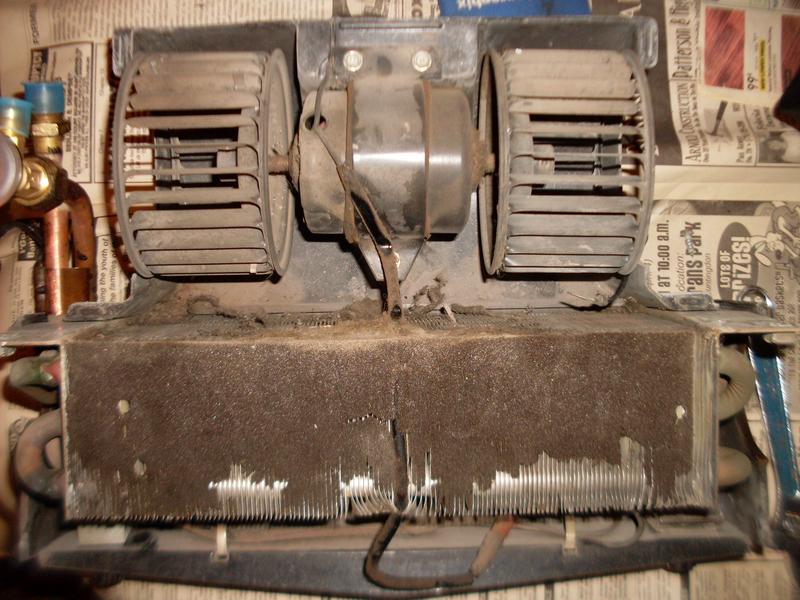 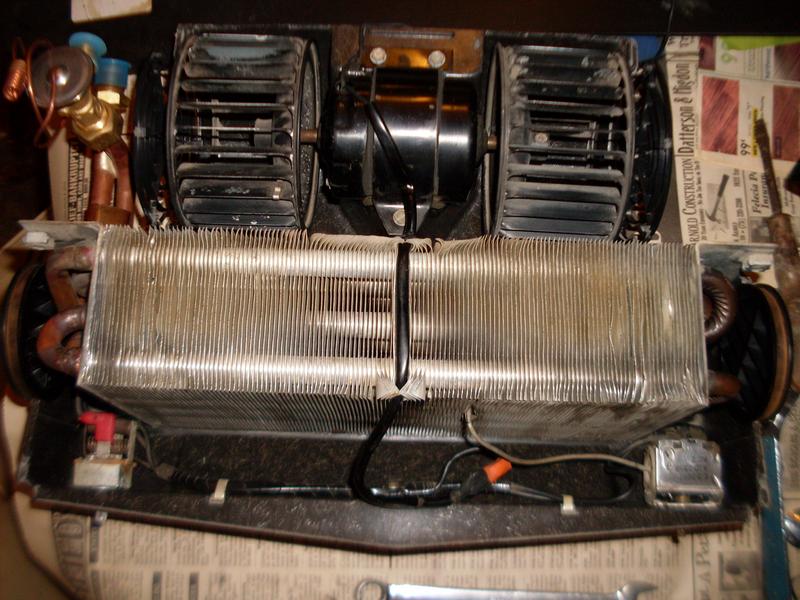 It wasn't hard to take apart & I washed the case out in the kitchen sink. cleaned the evaporator up & flushed it out good. re tested the blower after assembly & a couple coats of plastic lens tint paint.made it look a little more black, it was kinda grey before. After this pic I altered the mounts to move the unit to the rear of the car about 4-5 inches. gives more room under the dash for hoses to curve away from the gas pedal & makes it easier to reach the knobs since I moved my seats back. 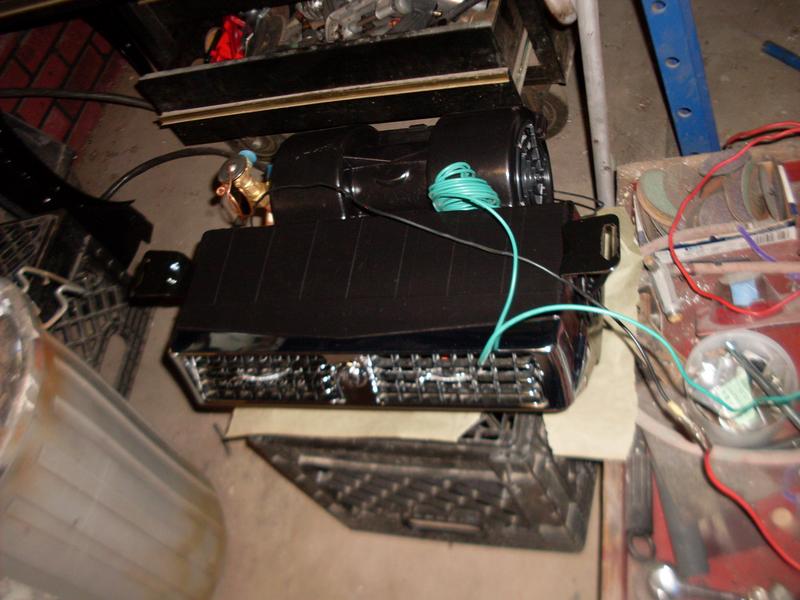 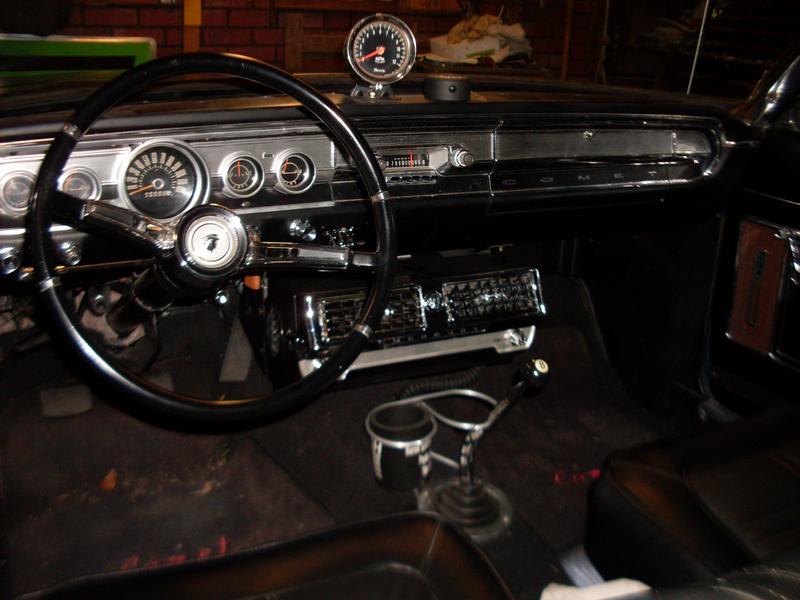 Nice job on the AC John. Love the hood lock.
I'm installing a security system which will have a tamper switch for the hood. Hoping that will keep people out from under the hood.