Thank you! He took an odd line a few times.
I think I’m moving up a class to get away from the slow pokes. Ill be the slow poke but at least I won’t have to hold back hehe

Dont learn much leading,,, step up
I'd rather do it myself if it's done right or not,,,isn't that what hotrodding is all about?

Heck yeah! Power to ya

Heck yeah! Power to ya

Should be fun! Ive got new tires coming and I gotta get my steering wheel centered. Also if you notice in the vids my hood is kinda bouncy

That’s cuz I removed all the inner structure and its ballooning up. I welded a small plate to the cowl with a retainer rod to hold it down. Got her up to 80 or 90 and its nice and stable now. Not a big deal but it was definitely a distraction.

Thanks you sir!! Hope to have better vids in October at the next event.

comethead wrote: ↑
Thu Apr 28, 2022 11:02 am
Dear Fred,
Great questions. I contacted the manufacturer and asked them. Here was their response:
Dear Joe,
The tape measures were cryogenically treated on the surface of the planet Jupiter and then calibrated to each other within .000003” (although they’re fractional). And then when returned to earth they were anointed and blessed by Carrol Shelbys ex-housekeepers brother himself! Then they are sold by Summit racing for $4 each.
On the plates he said they were specifically designed to interact with the curvature of the earth to clear the tire bulge by about the width of a cat whisker.
Its true. All of it!

This has to be one of the best answers to a question on this board. I love it.

Took the Falcon back to the track in late October. I decided to move up a level to get some faster running mates…boy were they fast!! For my experience level this was a way better group to run with. I latched onto a 1966 Mustang that was moving pretty good. I didnt have the oats to pass him on the straights (I found out he was running a 500hp 347) at around 125-130mph but I was only a few ticks behind him. I made that up in the corners. Not only caught him but I was in a good position to pass in the turns…but alas its only an open track event and passing in turns is a no no!
Great fun passing and trying to pass! 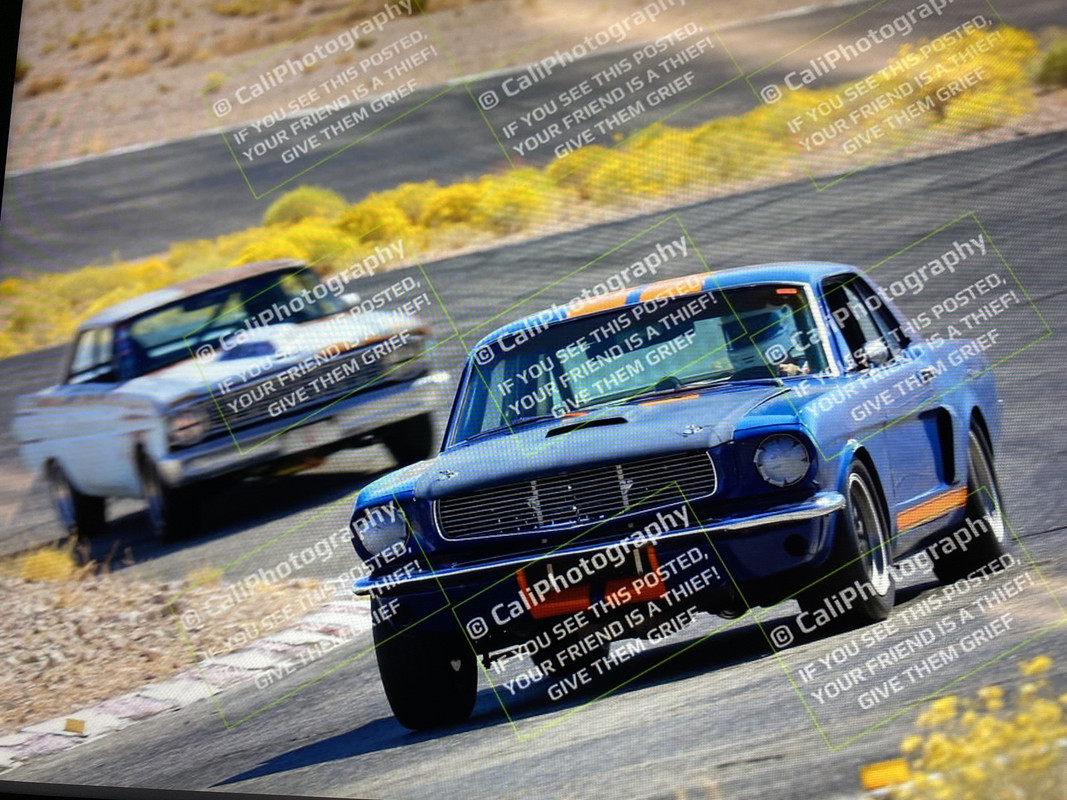 Trying to hold the lead 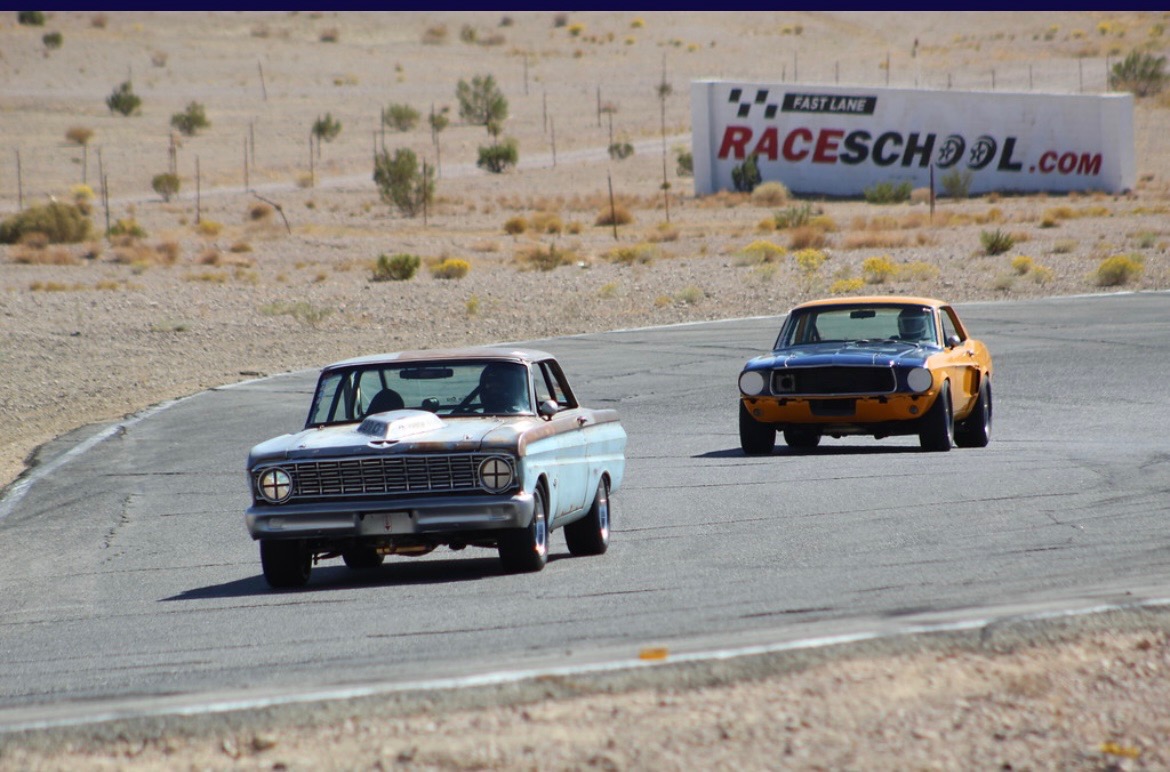 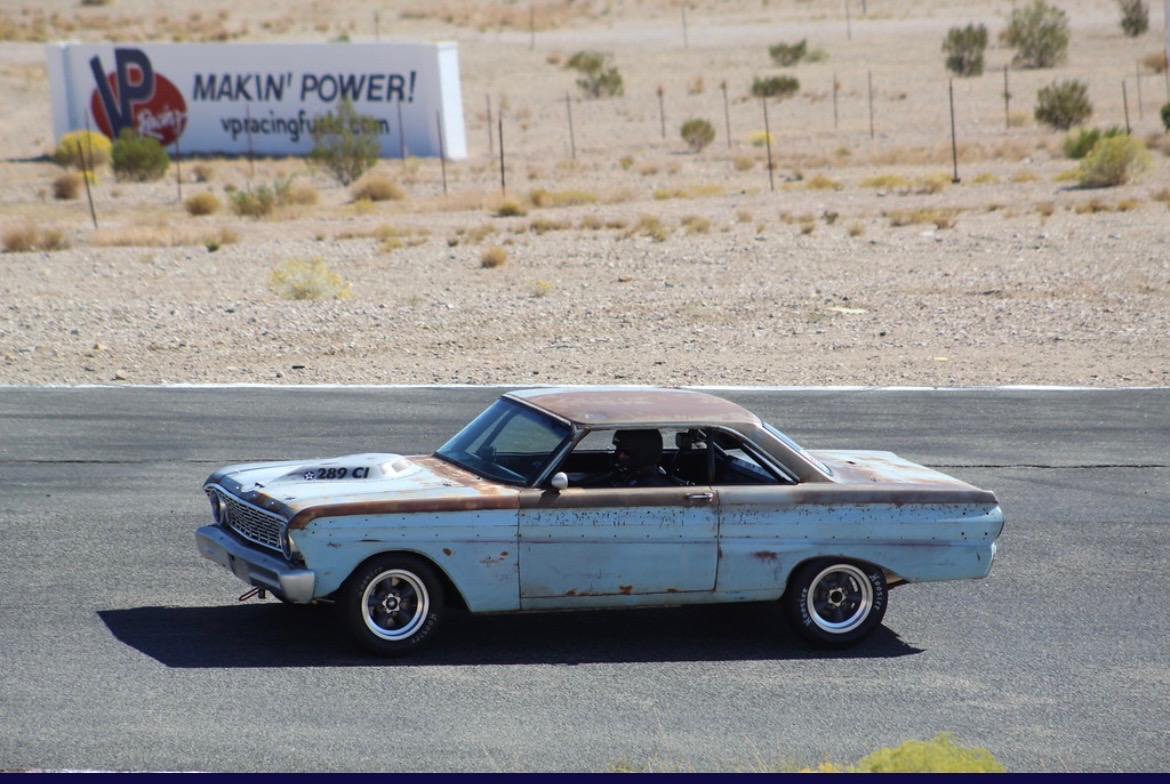 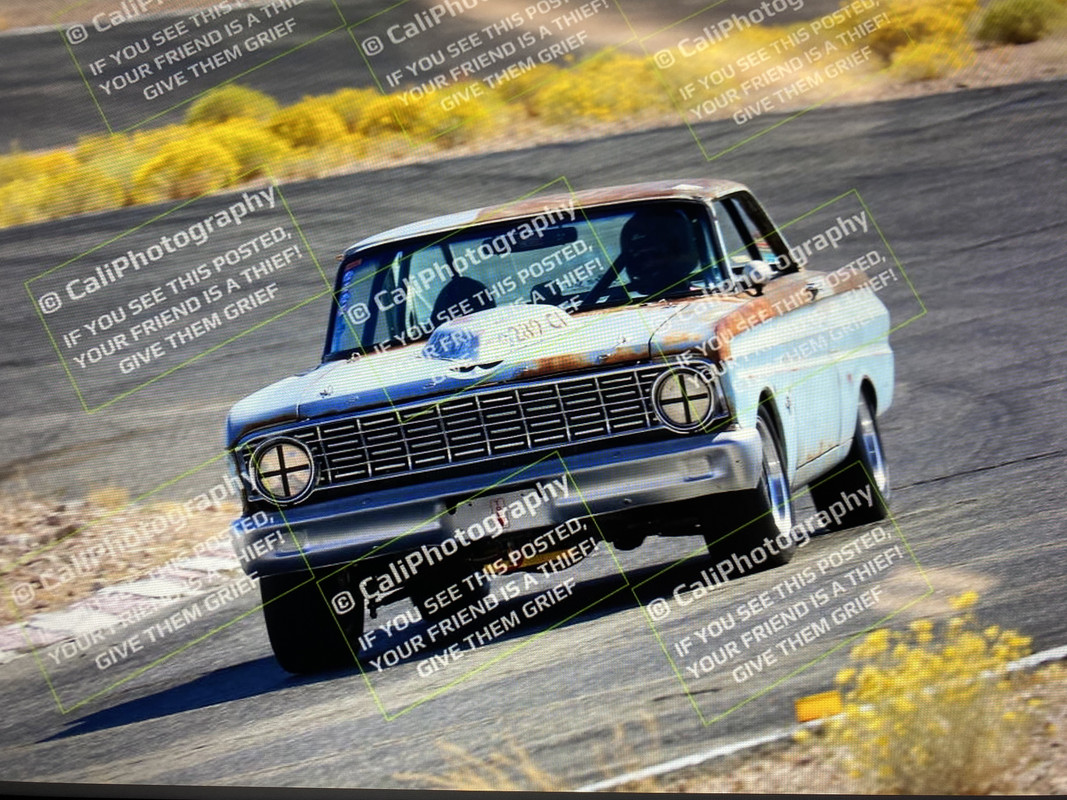 Only issue all weekend was a faulty radiator cap. It wasn’t venting properly. Temp was oscillating and the upper radiator hose popped off coming hard into Turn 9 at about 100mph. Couldn’t see through the water and steam, leading to an off road excursion and a break into the pits.
I had a spare cap and upper hose and I was back on the track before long. No issues after that.

A photographer caught my off road adventure 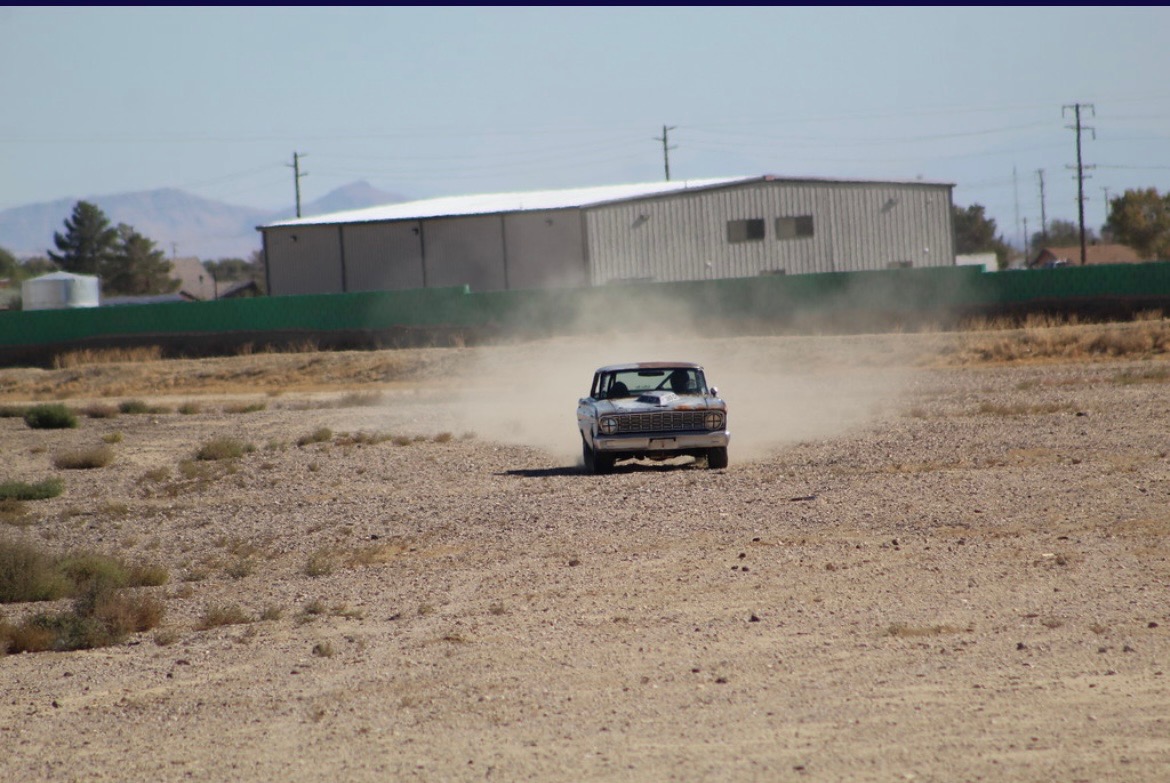 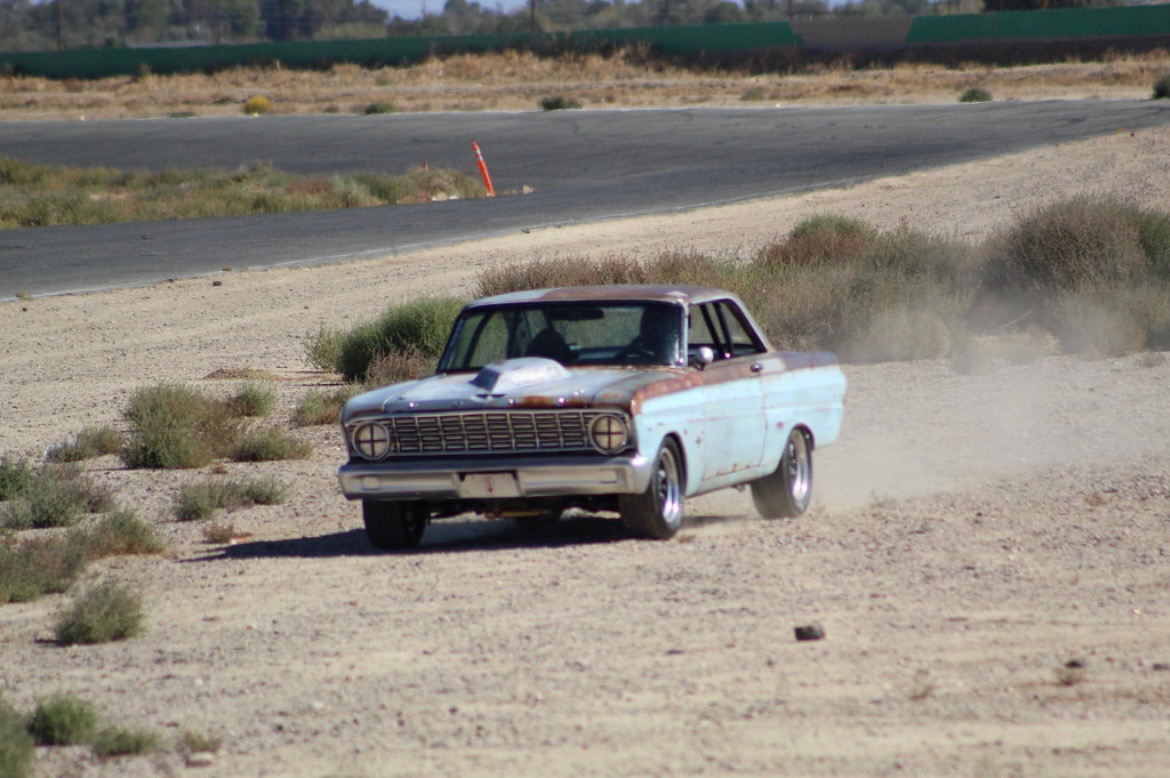 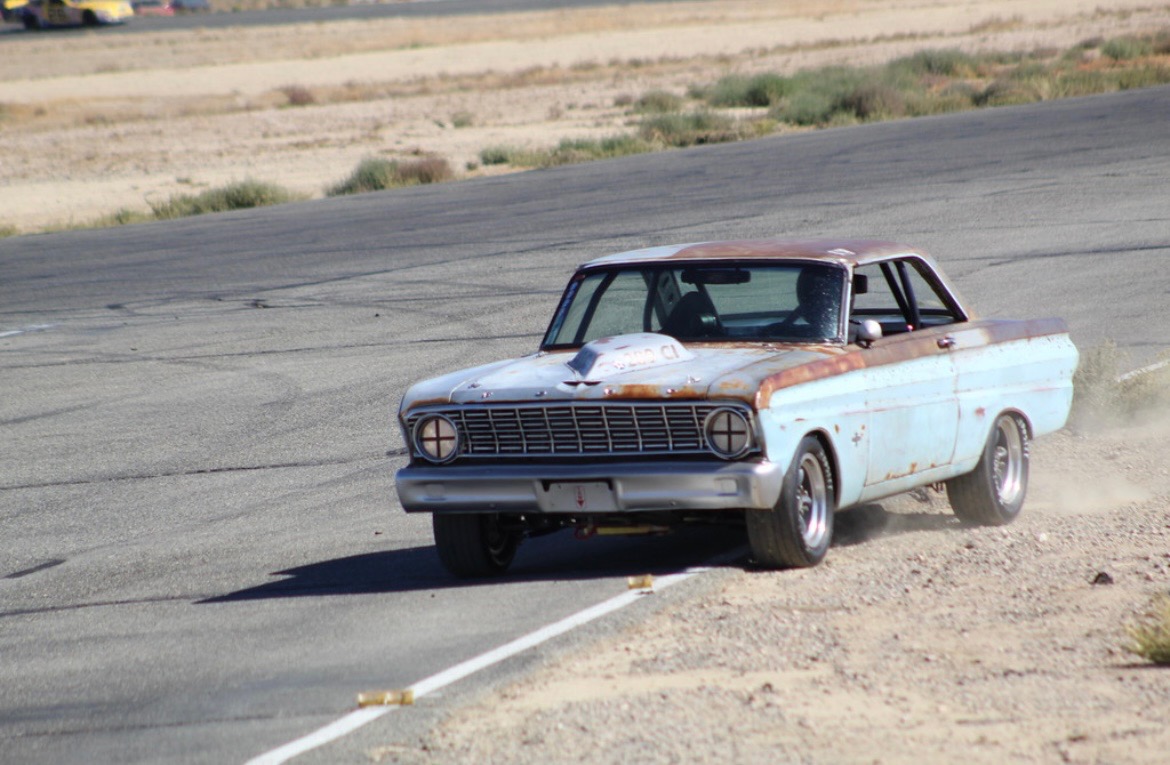 Overall it was a great weekend and it felt good to be able to hold my own with more experienced drivers. Of course my GoPro battery decided to die and I got no video of a great weekend. Bummer.
More to come.

Im gonna try to get some more top end out of her and lighten her up a bit.
At 125mph the engine hits the rev limiter set at 6700rpm. To that end I got a set of 3.55 gears to replace the 3.80s in there now. Ill lose some mid range grunt but hopefully gain some MPH at the top.
I have an aluminum case for the transmission to shave about 25 pounds from the car and I plan on lowering the car another inch. 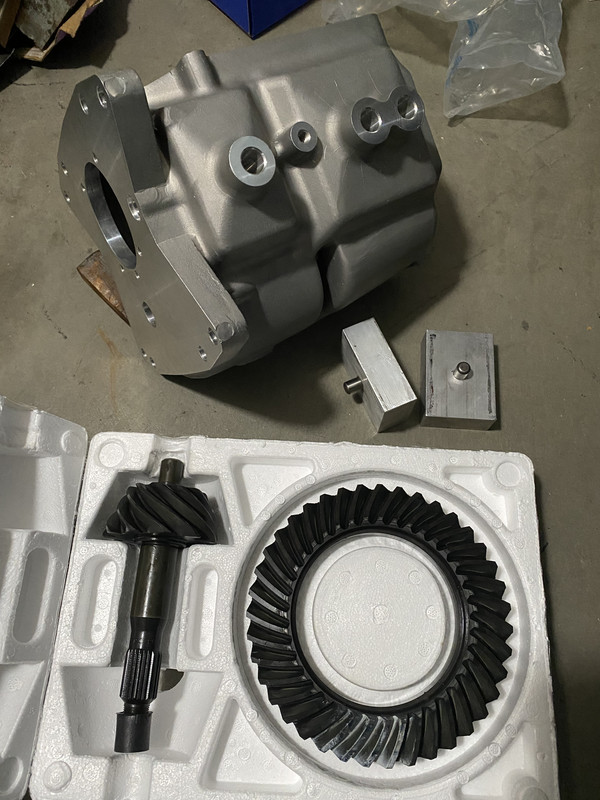 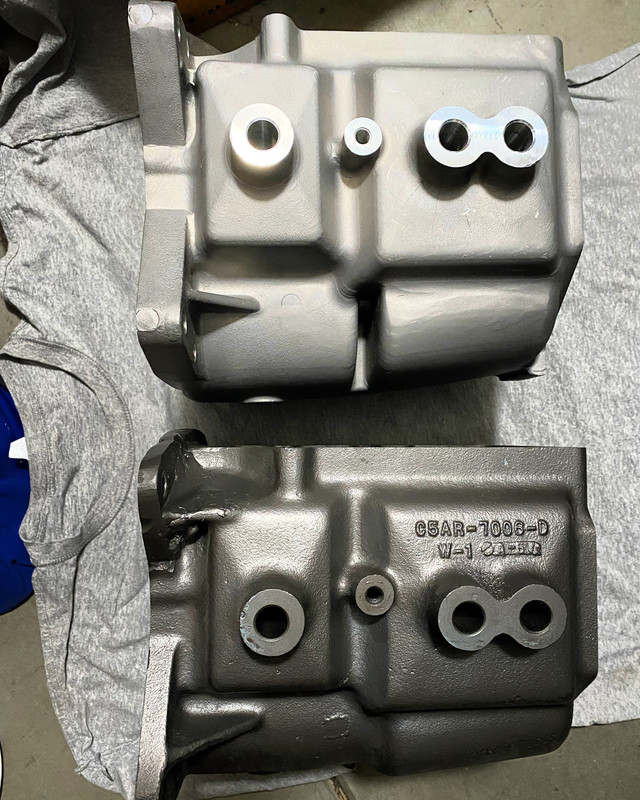 My kid took me to a track day last year and let me drive his car. Was a lot of fun although I spent a lot of time with my arm out the window pointing,,,lol

New shiny parts, always bring a smile to my face !!

Looks like super fun, Joe! I know you must be luvin' it!

Put charging those GoPro batteries on your prerace checklist. 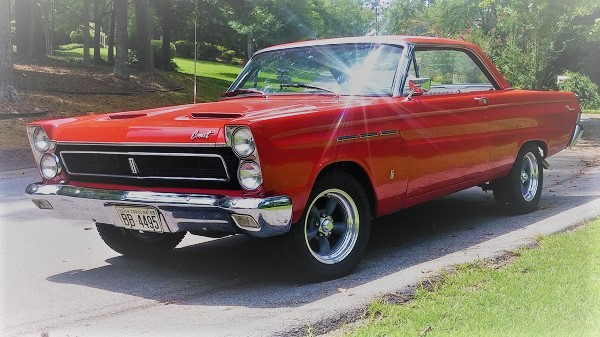 How did the tires hold up this run?

Good times!
Just wondering, in the pic where your leading the orange Stang what is the link I see under the right front, bump steer? If bump steer do you have a link where can I do some reading on it?
I'd rather do it myself if it's done right or not,,,isn't that what hotrodding is all about?

Return to “All in the Family, Comet's Ford Sisters”