Question: Assuming that Mac's data is accurate... does anyone have a knowledge/picture/diagram depicting the wiring for the washer pump that was used with the 2-speed motor? (Did that pump have more than four wires?)
Thanks,
kevin
1965 Caliente Convertible
5H25A525287 (76DM6204L5416)
Top

Kevin if you click on number 13 file the 1965 wiper section on this link,
https://www.squarebirds.org/Manuals/196 ... talogs.htm
then scroll down to page 7 of the diamgrams ,,,which dont start until after all the pages of numbers. but it is a 66 fairlane & falcon showing the layout & on the pump I only see 2 wires. it isnt a wiring diagram but I think if it had 4 wires they would show 4 on here.

Oh you said foot pump,sorry, my bad,the one I meant is electric. so you could get either one in 66?

I scrolled on down some found this fairlane sheet with footpumps for both single & 2 speed motors. 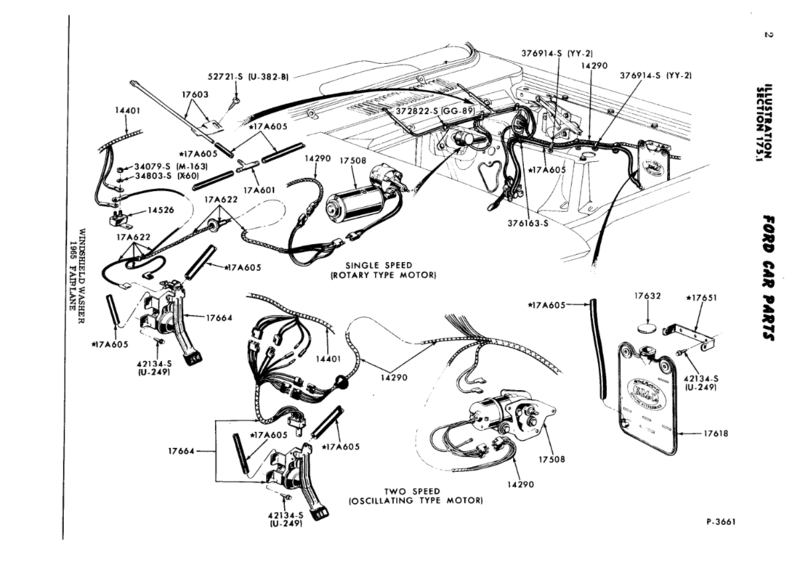 I was looking for something in my parts area and found this. I believe someone wanted to know how many wires were on the pump switch.
Jim

OK so having dug into this a bit more it appears that earlier Falcon's did indeed have a 2 speed wiper motor option (as early as '63?).

When (if ever) was the earliest this option was offered on the Comet? I can't find anything that leads me to believe it was an option on 64 or 65... however per my first post on this thread there is evidence that it appeared as an option starting in 1966.

In any case I am intensely curious about the wiring for the pumps that appeared with the 2 speed motors.

I can account for four wires (as per Jim's pictures)... however many of these pumps seem to have a 5th, or even 6th wire. The four I know of are as follows (what could possibly have been added to this?): With those 4 wires the pump switch has the ability (a) force the motor into action and (b) relay a kill signal to the motor. What other function is served by a 5th or 6th wire connected at the pump switch? (And in particular does 2-speed motor dictate there be additional wire(s)?)?

The set up I pictured in my last post was removed from a ‘64 Comet Caliente I parted out back in the late ‘70s. It may have been a dealer installed option.
Jim
'64 Cyclone
Top

Huh. Well it starts to appear to me that the '64 had an option for a 2-speed whereas the 65 did not. Perhaps the 2-speed option was taken away in '65 because of the addition of interval wipers (vacuum based governor).

I now wonder how the single (full) speed of the 65 compares to the two speeds on the 64... whether it is the same as the slow (or fast) or maybe something in between?